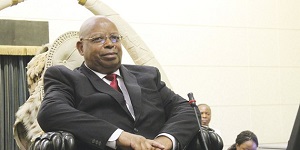 ZIMBABWE – Sweden has donated $1,8 million to the Parliament of Zimbabwe and the Auditor-General’s Office under the $4,8 million multi-donor support programme managed by the United Nations Development Programme.

The project is also funded by the European Union ($2 million) and the UNDP ($1 million).

Said Ambassador Ronnas: “We are very pleased to engage in and to support the very core of Zimbabwe’s political system — the Parliament.

“The support is multifaceted, but I would like to emphasise the gender aspect of the programme. Strengthening women’s participation and engagement in all parliamentary processes is a main priority for Sweden.”

He said it was important for Parliament and the Auditor-General’s Office to be capacitated so that they could carry out their mandate without constraints.

In his remarks, Mr Parajuli said they wanted to see Parliament able to perform its core mandate by promoting public participation, accountability and striving to achieve gender equality.

He said they were happy that other development partners such as the World Bank and the African Development Bank were also providing funding towards Parliament.

“This programme has a strong capacity building component that will ensure decisions of Parliament are anchored on evidence, sound knowledge and best international practices,” he said.

Mr Parajuli said it was gratifying that the new Constitution of Zimbabwe put greater emphasis on the role of Parliament.
Adv Mudenda said Parliament was elated that Sweden had fulfilled its pledge as this would go a long way in facilitating that the legislature carried out its responsibilities.

“The commitment you have amply demonstrated by keeping to your pledge through the contribution of 15 million Swedish Kronas ($1.8 million) to the Parliamentary Support Programme underlines the Swedish Government’s commitment to enhancing the effectiveness of Parliament of Zimbabwe in the national governance matrix.

“It is trite to mention that Parliament is the supreme representative, legislative and oversight institution and a vital cog in the demand side of accountability.

“Accordingly, an empowered Parliament is instrumental to any functional democracy,” said Adv Mudenda.

He said the support had come at an opportune time since Treasury was operating under a shoe-string budget that made it difficult for it to avail funds for all the requirements of the legislature.

Adv Mudenda said the objective of the Parliamentary Support Programme was to enhance and contribute to Parliament’s ability to efficiently and effectively carry out its constitutionally derived mandate.

He said the programme was meant to support the enactment of new laws and the alignment of some existing laws to the new Constitution, strengthen the oversight roles of Parliament, increase people’s participation in legislation formulation and decision-making among others.

ZIMBABWE - Sweden has donated $1,8 million to the Parliament of Zimbabwe and the Auditor-General’s Office under the $4,8 million multi-donor support programme managed by the United Nations Development Programme. The project is also funded by the European...
Share via
x
More Information
x