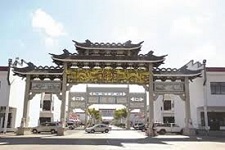 ZIMBABWE – The Long Cheng Plaza will be a hub of fulfilling entertainment tomorrow as it shuts down the year 2015 with an enormous party to be held at the gigantic club 1+1 and an open air bash in the front parking bay of the mall.

Club 1+1 will have a team of refreshing deejays like Selekta Base, Fujee, Black Snizzle, TK Beatz and MC Cut also known as “The Family” to usher patrons into 2016.

Dubbed the Illicit New Year’s Eve party will have special guests, celebrity couple Pokello and Elikem, who are also expected to give away 10 pairs free of the Pokello Pink Bottoms.

A 30 minute fireworks display will be held at the turn of midnight.

The show will also have an outside tent pitched outside the club where patrons will pay five dollars on entry whilst the main club will be 10 dollars whilst VIP will be going for 20 dollars.

In the front parking bay of the mall, there will be the three dollar street party where patrons are allowed to come in with their cooler boxes.

Gates to the event will be open by 12midday.

Selekta Base the organiser of the show said:

“We are also going to be graced by our special guests Elikem and Pokello who are giving away free 10 pairs of shoes to the ladies.

“People partying outside cthe club should not worry about rain fears as we have massive tents to be pitched up on the day.

“We invite people to come in their numbers and party with us as we celebrate the year 2016.”

Selekta Base also said patrons are assured of secure parking and tight security inside as they have added more forces on the security side.

Harare Man cheated his girlfriend, while she was admitted in hospital