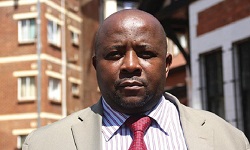 ZIMBABWE – Preparations for the 21st February Movement to celebrate President Mugabe’s birthday have moved a gear up with  the Zanu-PF Youth League yesterday revealing this year’s theme: Youth Celebrating An African Icon Through Enhanced Productivity.

Cde Pupurai Togarepi said this year’s celebrations will be held on February 27 at Great Zimbabwe in Masvingo.

“As (the) youth, we are celebrating the birth of our leader, founder of our revolution President Mugabe, mindful of his contributions to the political and economic freedom of his people.

“His principled stance in defence of Africa and the rights of its people has earned him the iconic stature of the highest order. We are confident that come February 27, we will celebrate the birth of our leader in style,” he said.

Said Cde Togarepi, “This year’s theme is also informed by the President’s highly saluted completion of his tenure as AU chairman. We are proud as Zimbabwean youths to be led by him. At the same time, we learn leadership skills from a living legend.

The secretary for finance Cde Tongai Kasukuwere said in terms of funds for the celebrations, donations were coming in from traditional sponsors. He said programmes had been lined up to coordinate stakeholders involved in the preparations.

“Preparations are going well and we are going to Masvingo tomorrow (today) to check on the progress on the ground and have an appreciation of the venue. We will have a meeting (today) to finalise the budget,” he said.

“We are not looking for a fixed figure on the amount which is needed for the celebrations but we want to make sure that on the day, everyone is well catered for. Our traditional donors are coming forward with various pledges ranging from transport, foodstuffs and other logistical support.”

At least 50 000 people are expected to attend the celebrations.