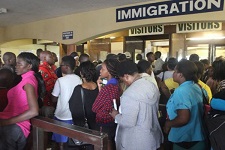 ZIMBABWE – For failing to produce 3000 South African Rands at the border post, 64 Malawians were denied entry into South Africa as the authorities in that country demand that someone entering their territory should declare as having such an amount.

Desperate lives … a woman flee across the South African border

Malawians continue to trek to South Africa for economic reasons

Nyasa Times understands that it is however 34 that have returned home with the remaining 20 being kept in Zimbabwe detention centre awaiting repatriation, as they have no valid travel documents and cash.

The 34 people, according to Malawi Immigration authorities had valid travel documents and had money on them to sponsor themselves their way back home, which made their life a bit easy for return.

Malawi authorities have confirmed that 34 people, all from the northern district of Mzimba were indeed released Friday by the Zimbabwean authorities.

“They were arrested on 29th August 2015 after they had just crossed Beit Bridge Police Check Point as they were attempting to enter South Africa.

“The South African government handed over the people to Zimbabwean government and since August they have been on remand in Zimbabwe, and as we are saying others would be repatriated again as soon as the Zimbabwe government finds funds for the exercise,” Mwanza Immigration Boarder Post Spokesperson Pasqually Zulu said.

With or without proper documents, some Malawians trek to South Africa to look for jobs

ZIMBABWE - For failing to produce 3000 South African Rands at the border post, 64 Malawians were denied entry into South Africa as the authorities in that country demand that someone entering their territory should declare as having such an amount. Despera...
Share via
x
More Information