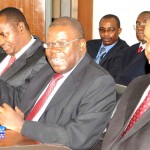 ZIMBABWE – HARDLY a week after the congress that ushered in a new political party led by Tendai Biti under the name People’s Democratic Party, an obscure outfit has emerged claiming the name, setting the stage for a bruising fight.

Ruyedzo Mtizwa said he was the interim chairman of PDP formed in 2008.

Mutizwa said he was shocked to hear that the former MDC Renewal Team had usurped their name.

“This came as no surprise to our members and legion of supporters as it is now trendy for some Zimbabweans to reap where they did not sow,” Mtizwa said.

“The renaming of the MDC Renewal Team is the work of our detractors bent on eroding our gains in the fight against Gukurahundi. On the other hand, it comes across as an indicator of how hardworking our cadres have been over the past seven years. Our determination and political acumen has forced the MDC Renewal party to attempt to hijack the PDP,” Mtizwa said.

Mtizwa, however, said they would not go to court over the matter, but that history would judge the former MDC Renewal Team harshly if they decided to continue using the “stolen name”.