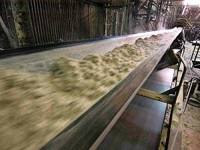 ZIMBABWE – Harare – Zimbabwe sugar producers, including two operations run by South African agro-processor, Tongaat Hulett, are expecting production in the industry to only start recovering in 2018.

The country’s sugar output is expected to fall markedly, dragged down by drought conditions in the region, tough economic conditions and currency woes.

Tongaat Hulett owns Zimbabwe listed Hippo Valley and non-listed Triangle Sugar Corporation in the southern African country that has been predicted to experience late and below average rainfall this season.

Sydney Mutsambiwa, the chief executive of Hippo Valley, said the sugar industry in Zimbabwe would fall in the next two years.

For the 2016/17 season, production will depend on water levels harnessed in dams but experts are encouraging farmers and agriculture companies to switch to irrigation.

“A return to regular growing conditions, together with the benefit of the intensive agricultural improvement plans… should lead to industry and company sugar production increasing to around 540 000 tons and 270 000 tons respectively by 2018/19,” Mutsambiwa said.

The overall Zimbabwe sugar industry has now been forecast to decline in output, with the country’s sugar production expected at between 410 000 tons and 445 000 tons for the full season to March 2016. This has been attributed to lower cane yields by both large-scale and private farmers whose cane deliveries for the half-year firmed by 4 percent to 549 645 tons.

In the half year to September, Hippo Valley spent about $18.8 million (R263m) in working capital although this was below the previous contrasting period’s $26.4m working capital.

Hippo Valley now has a net debt of $33.6m, slightly lower than the $38.4m for the year earlier period, with the 2015 debt figure attracting an interest charge of $3.4m.

Revenues for the interim period were down at $70.2m, from the previous contrasting period’s revenues of $82.5m.

Profits for the period were down by more than 70 percent at $2.3m, in line with other major corporates in Zimbabwe such as SABMiller’s Delta Corporation that have recorded massive profit declines.

The period under review was characterised by “lower consumer spending as a consequence of low disposable incomes” as well as “higher unemployment levels, coupled with the depressed sugar prices” in its traditionally lucrative export markets.

Tongaat Hulett said this month that it was to cut wages to contain costs in an increasingly difficult environment.

Peter Staude, the chief executive of Tongaat Hulett, said this month that “sustainable cost reductions achieved over the past two years (equivalent to about R950m in real terms),” while having to absorb input price increases, provided a good base for the next steps in the concerted cost-reduction process.”

ZIMBABWE - Harare - Zimbabwe sugar producers, including two operations run by South African agro-processor, Tongaat Hulett, are expecting production in the industry to only start recovering in 2018. The country’s sugar output is expected to fall markedly...
Share via
x
More Information