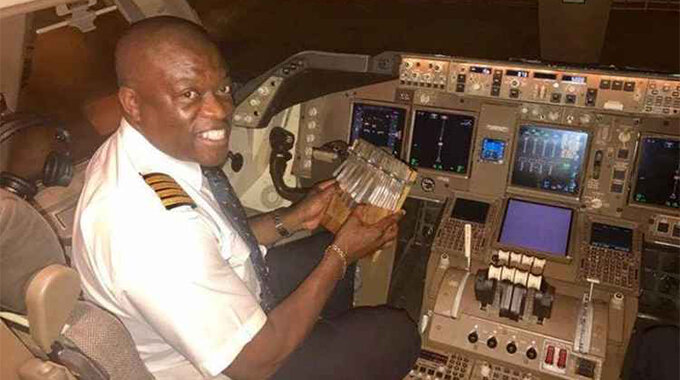 Born in Harare, Zimbabwe Captain Obet Mazinyi was the first Black African pilot in Hong Kong having moved from Air Zimbabwe in 1989 when Air Hong Kong wanted a pilot for their newly acquired Boeing 747.

He is currently the senior instructor and examiner/ Check Captain for Cathay Pacific on the Boeing 747-400ERF and Boeing 747-8.

Captain Mazinyi has been with Cathay Airlines group including Air Hong Kong for 31 years of which almost 26 years have been spent at Cathay Pacific.

His love for flying planes developed on his first encounter of traveling in an aeroplane when he was going to a boarding school in Lusaka. According to Mazinyi, it was a Douglas DC-3 and from then he knew he wanted to be a pilot.

Mazinya got his first flying training with Zambia air services Flying (ZASTI) after a tough selection process with 3000 candidates all vying for only 10 slots that were available.

After attaining his Private Pilots License, Zambia Airways sponsored him to attend the College of Air Training in Southampton – a British Airways flying college.

During his illustrious career, Mazinyi has flown some of the iconic aircraft both new and old.  From flying the Cessna 150, Vickers Viscount VC-7 and VC-8, Airbus A300-600 to the Boeing 747-8. The list is very long it needs to be dedicated it’s own space and time.

Based in  Kai Tak, the Zimbabwean born captain has had the opportunity to land at one of the most difficult yet fascinating runway – the Kai Tak airport.

Captain Mazinyi has enjoyed flying the Hong Kong- San Francisco route while flying the B747-400 which he flew for 11 years. Now he flies the B747-8 and enjoys the regional routes to Singapore and Penang and also trips to Miami and New York.

Some of his special memories in a aviation was h to fly a B747-400 aircraft to its final retirement and delivering the last Boeing 747-8 for Cathay Pacific Airways from the Boeing field in Seattle to Hong Kong.

Captain Mazinyi says young and future aviators should be patient and make steady progress. Adding that they should always remember that there is no substitute for experience.

He further advises them to fly with enthusiasm and always review  procedures at least once every day.

If he had the opportunity to restart again, Mazinyi says he would do it the same without any second thought albeit he would add his other fascination, flying to space.

Captain Mazinyi is married to Persy, his wife for 29 years.

Born in Harare, Zimbabwe Captain Obet Mazinyi was the first Black African pilot in Hong Kong having moved from Air Zimbabwe in 1989 when Air Hong Kong wanted a pilot for their newly acquired Boeing 747. He is currently the senior instructor and examiner/ C...
Share via
x
More Information