A nation of heroes 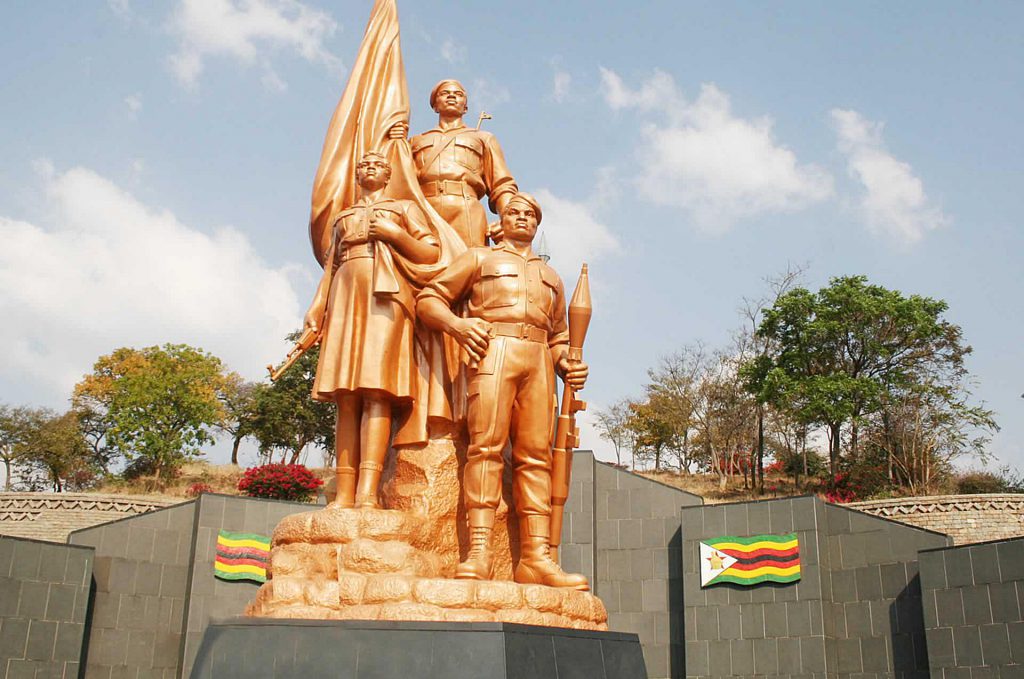 Today, Zimbabweans celebrate Heroes Day; that day when national valour is honoured and cherished on our land.

It is that great day when we remember, salute and commemorate the huge sacrifice that went into liberating this country from the yoke of repression, oppression, indignity and colonialism, even though I strongly feel to confine valour to the liberation struggle does not do justice to the notion of heroism, as I will later argue in this instalment. Indeed, the biggest national folly over the years has been to regard heroism as only limited to the gargantuan sacrifice associated with our liberation struggle. As a nation, we ought to seriously reflect on this monumental handicap.

Heroes Day should be a day to celebrate national heroism in all areas of endeavour including sport, the arts and other non-political vocations. Even the new heroes that have emerged in our current democratic struggle to complete the unfinished business of our sacred war of liberation deserve recognition.

I take note of the various non-war veteran and civilian personalities who are set to be awarded grand awards of merit today, including Mnangagwa’s wife. But I am not sure about the efficacy of—and inclusivity within–the body or committee that made the recommendations, assuming it was not ED himself who personally came up with the names that scandalously included his own wife.

Many paid the supreme price. Thousands of the patriotic sons and daughters of this land lost their limbs so the collective national whim could walk again. Today, we remember their heroism that delivered a whole nation and its sovereignty.

However, the tragedy is that we have narrowed this great day only to the celebration of our political achievement. Yet heroism is not just political. It must be borne in mind that as a nation, we have exhibited and displayed valour and gallantry in many other spheres that ought to be included in these moments that we cherish national heroism. This fixation with gallantry as depicting only the story of our liberation struggle has led to the tragic folly in which an organ of a political party determines, confers and declares hero status in our country.

True heroism, even if a nation decides to go for declaring it, should have such declaration and conferment done by a multi-stakeholder national committee that looks at excellence beyond our war of liberation. This country must seriously reflect on this with the requisite sobriety and non-partisan aptitude. For to politicise national heroism and have it accorded by a political party is to demean and belittle national valour.

Zimbabweans know that the current democratic struggles are an attempt to complete the unfinished business of the liberation war —the reason being that in 1980, we achieved political independence without the necessary freedoms. Indeed, independence came alone, unaccompanied by the requisite freedoms that should have ensured that citizens were protected by–and from–their own government.

And even if politics were to be the only yard-stick for heroism—which it should not–heroes are not necessarily found in Zanu PF. All those patriotic Zimbabweans including Ndabaningi Sithole, Edgar Zivanai Tekere, Gibson Sibanda and Morgan Tsvangirai are national heroes too. They and many other great men and women have positively imprinted their own indelible footprints on the sands of this country’s history.

We may sit in our motley political group called the Politburo and claim to be “declaring” national heroes but the truth is that true heroism is never declared or conferred by anyone. True heroism is attained in one’s lifetime; it is the cherished memories human beings leave behind in the course of the tenuous journeys of their lives.

Nelson Mandela died a few years ago and was buried in his home village of Qunu, not in any special acre or hectare reserved for heroes. Yet world leaders, including the then US President Barrack Obama and our own Robert Mugabe and Morgan Tsvangirai descended on that village as the world saluted the global icon.

No “Politburo” sat anywhere to confer Madiba with any hero status but his funeral in that village grabbed world attention and left no one under any shadow of doubt that true heroism is never conferred. It imposes itself.

As Zimbabwe celebrates Heroes’ Day today, we must reflect on whether we are doing justice in the way we cherish national excellence. One would have thought this is the moment to celebrate our country’s sons and daughters in all spheres whose works and capabilities have shone through the mediocrity of our time.

Heroes go beyond politics. We all have our frailties as mortal human beings but I will hazard a personal view and say today we ought to be celebrating our national heroes such as Peter Ndlovu, Moses Chunga, Thomas Mapfumo, Alick Macheso, Byron, Wayne and Cara Black and Tanya Muzenda. All those children taking charge of child-headed families are national heroes. They deserve celebration today. Those grandmothers and widows looking after orphans whose mothers died of HIV/Aids and other ailments are national heroes.

For me, my two aunties Maria Gombera and Priscilla Makumbe Chimbwamda who carry expansive family responsibilities in their own separate but unique ways are national heroes. They are human manuals; two great women, from whom the nation can take great lessons on the chastity of filial love.

All those youths who have shown no fear of this regime and have needlessly been arrested, including Makomborero Haruzivishe, are national heroes. Last Maengahama and Tungamirai Madzokere who spent many years in prison for a crime they did not commit are national heroes, not to forget Rebecca Mafukeni, who died while in prison for the same alleged crime.

On Oliver Mtukudzi, we did well by granting him the highest national honour.

Heroes Day should be broadened for the nation to spare a thought for Proud “Kilimanajaro” Chinembiri, Afonso Zvenyika, Jairos Jiri, Margaret Dongo and the many sons and daughters of this great land whose achievements we must all cherish across the racial, political, religious and ethnic divide.

We should remember Joshua Nkomo alongside Rekai Tangwena, Hebert Wiltshire Chitepo and even our Mighty Warriors who in 2016 were one of only two teams representing the African continent at the Rio Olympics in Brazil. They were in Rio de Janeiro representing not even national but continental excellence.

We must always cherish their achievement.

Heroes’ day should be about celebrating the broad successes and achievements of this nation’s sons and daughters in their various zones of distinction.

Given our painful national moment, I wish to conclude by saying today should be about celebrating every Zimbabwean within and outside the country.

Indeed, we are a nation of heroes and heroines.

When you have millions of people slugging out a living every day—with whole families surviving on less than US35 cents a day, they are heroes.

The rest of us are vendors and small-time traders, earning a living through the rigours of honest, hard work. Our daily grind may have been curtailed by a fearful regime hiding behind the Covid-19 pandemic but vendors and all informal traders are national heroes.

Those millions who survive by selling wares on the pavements of our cities and the roadsides of our highways need to be celebrated today. They chose a life of honesty and hard work.

Indeed, they are national heroes.

Millions have left the country to do menial jobs elsewhere but collectively, every year, they remit millions of dollars that are aiding national sustenance.

They are national heroes.

Those old men and women in the villages queuing for food handouts without raising a whimper of the indignity of it all are true national heroes.

Our civil servants and those remaining workers in the few companies that are still ticking, those in the civic and political outfits who have gone some for months on end without a salary—are national heroes. They are honestly working and praying for a new dawn for the country that they love.

Special mention must be made of the rest of the civil service who toil every day and wait patiently for inadequate tokenism at the end of the month while government prioritizes those with bombs and guns. Yes, our civil servants are national heroes.

They deserve to be celebrated today.

Not everyone is in the cockpit of power and can afford fleecing taxpayers and struggling parastatals as is the case with the few connected people, particularly Mnangagwa’s inner circle and the kleptocratic lot in the Office of the President and Cabinet. The rest of us are hard-working, valiant citizens who continue to hustle and live honestly in the hope that tomorrow will be a better day.

We are all part of this nation of heroes.

Yes, every Zimbabwean is a hero.

We are all national heroes.

Zimbabweans have always been a heroic people. And I keep the faith that the heroic people of this land will free themselves from the clutches of repression engendered by this clueless, incompetent and murderous regime.

Hope springs eternally in some of us, even though hope alone is not enough. We, the people of this land, are the very people we have been waiting for.

And we are all heroes.

Together, we shall eventually do it—again.

Luke Tamborinyoka is the Deputy Secretary for Presidential Affairs in the MDC Alliance led by the people’s President Advocate Nelson Chamisa . Tamborinyoka can be contacted on his Facebook page or via his twitter handle @ luke_tambo .

A nation of heroes

... And the case for a multi-stakeholder committee to confer hero status By Luke Tamborinyoka Today, Zimbabweans celebrate Heroes Day; that day when national valour is honoured and cherished on our land. It is that great day when we remember, salute and co...
Share via
x
More Information