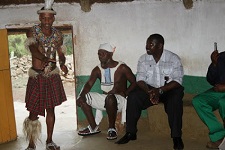 ZIMBABWE – A marrried couple was in near fight at a local church service after the husband’s cheating shenanigans were exposed through what the prophet termed ‘miracle spectacles’.

Prophet Tapiwa Freddy of Goodness and Mercy Ministries has introduced the miracle spectacles which, according to him, allow people to see their past, present and the future.

The man of cloth was preaching about the miracle spectacles and a man who identified himself as Baba Margret doubted their authenticity during the service.

He was then invited to come to the podium with his wife who was among the congregants to get anointed to see the ‘second world’.

They were instructed to look at the altar cloth and they all begin showing gestures of seeing shocking things.

The woman then charged towards her husband claiming that she had seen the ‘cheating moments’ he had with a certain woman.

“So that’s what you will be doing when you say you are going to town,” she said before being restrained by ushers.

The man admitted to cheating, saying he even saw some of the illicit ‘errands’ she did with the girlfriend.

The miracle spectacles, however, stirred debate among people who attended the service but those who got the chance confessed to have seen their past, present and future.

Questioned to explain his miracle spectacles, Prophet Freddy people should not be surprised saying it has biblical reference.

“This is a gift I was given by God and we have many incidents in the Bible, I can refer 2 Kings 6 verse 17,” he said.

“It is an anointing within me, I don’t only do it on my altar but I can tell anyone to look on the wall, even in the air at any place and seeing with miracle spectacles.

“We have two worlds, the one we are seeing with our fleshy eyes and the other one people see when I order the miracle spectacles to work for them,” said Prophet Freddy.

He said he can also help people recover stolen property as long people have police reference.

“I can use the miracle spectacles to recover stolen property and locate the thief as long there is police report.

“I once helped a family in Mt Darwin to recover their heard of cattle which was in Mozambique by then,” he said.

The man of cloth said he will be holding a Cross Over Night at his church opposite Glen View Poly Clinic.

“We are having a cross over night on December 31 and I will give people the chance to watch 2016 so that they will know what awaits them,

“Everyone who wants to know about his/her forthcoming year should attend the service,” he said.

ZIMBABWE - A marrried couple was in near fight at a local church service after the husband’s cheating shenanigans were exposed through what the prophet termed ‘miracle spectacles’. Prophet Tapiwa Freddy of Goodness and Mercy Ministries has introduced...
Share via
x
More Information