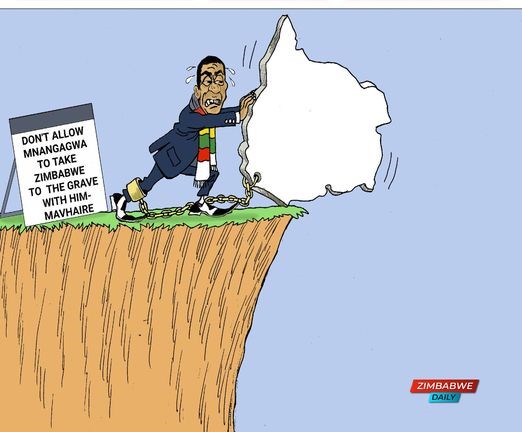 HARARE – Seven years ago, Zimbabwean journalist and activist Itai Dzamara went missing, and now his wife Sheffra still nurses memories of how a neighbor rushed in on the morning of March 9, 2015 to tell her how he had been abducted by men driving an unmarked vehicle who feigned to be arresting the prominent anti-government activist for cattle theft.

That was the last time Dzamara had stepped out of his home in the capital Harare’s suburb of Glenview, where he had left his wife preparing breakfast for him after he said he was going to get a haircut at a nearby shopping center.

Unsure whether to call herself a widow, Sheffra still mourns for her husband, who she is not sure is dead or alive.

“Every time, I’m thinking about my husband. I’m in pain. I want answers, and no one is giving me them,” said Sheffra.

Some of the family members have already died before getting answers.

In 2020, five years after Itai went missing, then 34-year-old Patson Dzamara, who was thrust into anti-government activism while searching for his brother, succumbed to colon cancer.

In Lupane district in Zimbabwe’s Matabeleland North Province, tears still have not dried for 61-year-old Thembelihle Ndlovhu, who said her parents were abducted in broad daylight on Sep. 16, 1983 by armed soldiers.

The reason, she said, was they had answered in Ndebele when soldiers who spoke in the native Shona language demanded to know if they had seen dissidents passing through their village.

“Don’t speak to us in that language,” Ndlovhu remembered the words uttered to her parents before they were bundled up and thrown into the back of an army vehicle, which sped away.

That was the last time Ndlovhu saw her parents, when she was just 19 years old.

“I don’t know what happened to them, because if they were killed, we would have at least seen their bodies,” she told Anadolu Agency.

Yet the sorrows gripping many like Ndlovhu and the Dzamara family still happen.

Over a decade ago, the UN General Assembly adopted a resolution designating Aug. 30 as the International Day of the Victims of Enforced Disappearances, a day that has continued to be observed in many countries around the world, including Zimbabwe.

Many like Ndlovhu’s parents in this southern African nation were disappeared during the genocidal atrocities that targeted the Ndebele tribe by government soldiers.

The operation, carried out ruthlessly by former President Robert Mugabe’s North Korean-trained soldiers, became known as Gukurahundi, which arose in 1982 until 1987.

Gukurahundi was derived from a Shona language term which loosely translates to “the early rain which washes away the chaff before the spring rains” and targeted opposition supporters back then who comprised mainly the Ndebele tribe led by the late Joshua Nkomo.

Even though 20,000 Ndebele people were said to have been massacred during the atrocities characterized by abductions of many like Ndlovhu’s parents, President Mugabe did not choose to apologize until his death three years ago.

Rather, the late Zimbabwean leader went on record in the media calling the atrocities “a moment of madness.”

Four decades after Zimbabwe gained independence, in 2020, even as they were reportedly kidnapped at a police station following their arrest for staging anti-government protests during COVID-19 restrictions, opposition activists Joana Mamombe, Cecilia Chimbiri, and Netsai Marova have been slapped with charges of faking their own abduction.

Their alleged abductors have not been brought to book, and instead, the opposition trio are still on trial at the courts.

Zimbabwe’s media leaders like Rashweat Mukundu, a media researcher and Africa adviser at International Media Support, an international NGO located in Copenhagen, Denmark, accused authorities in Zimbabwe of being behind the continued abductions of government critics.

“Zimbabwe has failed to deal with state-sponsored abductions and torture of political opponents, journalists, and human rights defenders. The situation is not improving but worsening as the state security structures and the judiciary are now fully captured by the political elite and there is no protection or justice for victims of abduction,” Mukundu told Anadolu Agency.

Even Herbert Moyo, a South Africa-based Zimbabwean educationist, had no kind words for the regime here amid mounting abductions years after the country attained independence from British colonial rule.

“The incessant and well-calculated abductions being carried out by the state in Zimbabwe on dissenting voices is a big dent on our maturing democracy. It is only the regional bodies and international organizations that can whip the Zimbabwe government into line and stop these human rights violations. It can’t be correct that 42 years after independence, the state is involved in those dirty and Adolf Hitler tactics of terror,” Moyo told Anadolu Agency.

Stanford Nyatsanza, a public policy researcher at the Zimbabwe Democracy Institute, a not-for-profit public policy think-tank based in Zimbabwe, said abductions have been weaponized over the years to silence anti-government critics.

“The issue of forced disappearances or abductions started during the Mugabe era as a weapon to deal with political opponents both in opposition political parties and civil society. We’re likely going to see a rise in abduction cases as Zimbabwe nears the 2023 elections,” Nyatsanza told Anadolu Agency.

HARARE - Seven years ago, Zimbabwean journalist and activist Itai Dzamara went missing, and now his wife Sheffra still nurses memories of how a neighbor rushed in on the morning of March 9, 2015 to tell her how he had been abducted by men driving an unmark...
Share via
x
More Information