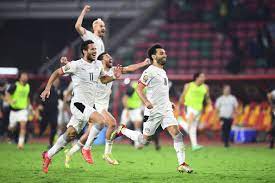 CAMEROON – A night of devastation and shattered hopes in Cameroon after the Pharoahs of Egypt booked their place for the final match of the AFCON 2021 competition at the expense of hosts Cameroon.

Egypt beat Cameroon 3-1 in penalties in what was a tension soaked match.

Indeed the game after 90 minutes had remained barren with both teams missing several chances to go ahead. 30 minutes of extra time still could not separate the teams.

The result left Cameroonian fans across the country and around the world shattered.

There are no teams that have won the TotalEnergies Africa Cup of Nations titles than Cameroon and Egypt. Between them they lifted the Holy Grail of African Football twelve times, five for the Indomitable Lions and seven for the Pharaohs.

On Sunday, the Pharoahs would attempting an 8th title when they face Sadio Mane’s Teranga Lions of Senegal. For Senegal, this gives yet another chance for them to lift their first AFCON trophy.

But some would see the contest more as a test of the best player in Africa between two major players for Liverpool- Sadio Mane and Mo Salah.

CAMEROON - A night of devastation and shattered hopes in Cameroon after the Pharoahs of Egypt booked their place for the final match of the AFCON 2021 competition at the expense of hosts Cameroon. Egypt beat Cameroon 3-1 in penalties in what was a tension ...
Share via
x
More Information