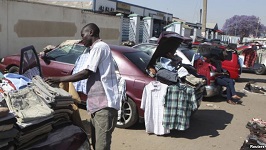 ZIMBABWE – Zimbabwe’s economy ends 2015 with predictions that prices will continue falling in the new year. But economists say that trend may not benefit anyone.

Most Zimbabweans seem to be worse off today than in 2009 when the southern African nation abandoned its worthless currency and started using multiple currencies – chief being the U.S. dollar. After years of staggering inflation, prices stabilized and things have changed course; there is now deflation in Zimbabwe.

But John Robertson, an independent economist in Harare, explained that was not the good news it sounded like to either Zimbabweans and President Robert Mugabe’s government.

“Deflation is normally associated with people having money to spend, but choosing not to buy these they want because they will be cheaper next month or cheaper in two, three, months time. What has been shrinking in Zimbabwe is buying power. Government incomes are only payable out of tax revenues and tax revenues are going down. So the government is out of touch with developments in the markets,” he said.

Robertson said given the revenue and economic situation, the government should be shrinking its activities. Since it has not, he said, that explained why President Mugabe’s government could not pay salaries for its workers in December. Revenue is falling, but the number of workers is growing. Government workers’ salaries chew up more than 85 percent of revenue generated.

Gift Mugano is a senior economics lecturer at the University of Zimbabwe and a government consultant. He summed up Zimbabwe’s journey from hyperinflation to deflation. Both economic situations that have caused pain to most Zimbabweans. Part of the problem is the weak South African rand and Zambian kwacha, which has cut prices for the large amount of goods Zimbabwe buys from those two countries.

“That is a major force causing deflation. But there is also another one which is going to remain with us permanently for medium to long-term future: constrained demand, reduced demand has become a cancer in the bone marrow in Zimbabwe. Low income has become the second enemy under the U.S. dollar in Zimbabwe. So people are not spending, so companies are getting desperate,” he said.

So in Zimbabwe, there were no goods to buy in 2009, now there is no money to buy the available goods at the close of 2015. Both Mugano and Robertson said there is a need to create investments to create a broader revenue base and employment in Zimbabwe to address the issue of deflation.

ZIMBABWE - Zimbabwe's economy ends 2015 with predictions that prices will continue falling in the new year. But economists say that trend may not benefit anyone. Most Zimbabweans seem to be worse off today than in 2009 when the southern African nation aba...
Share via
x
More Information