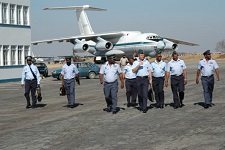 ZIMBABWE – The Air Force of Zimbabwe has dismissed a recruitment message circulating on social media as a hoax, saying it does not have such plans at the moment.

Some crooks are taking advantage of the current economic challenges characterised by high rate of unemployment to fleece job seekers.

“The Air Force of Zimbabwe has been inundated with calls being made by people inquiring on a recruitment exercise message which is circulating on social media.

“The message goes on to give academic qualifications required and reveals that more information will be published in The Sunday Mail on February 7, 2016.

“The AFZ would like to advise the general public that there is no such recruitment on its plans,” said Air Commodore Chiganze.

“People should ignore this message and report anyone purporting to represent the AFZ in any recruitment exercise,” he said.

Air Commodore Chiganze said the AFZ does not advertise through social media platforms.