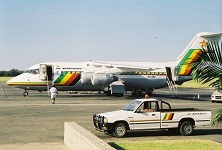 ZIMBABWE – HARARE – The crisis at Air Zimbabwe Holdings (Private) Limited continues to mount, with more assets being attached to raise money in settlement of over $247 000 severance package for a retrenched top manager.

Former aircraft engineering supervisor, Engineer Moses Zishiri, is the latest to obtain the High Court approval to attach a fleet of eight vehicles, among other movable assets to recover his dues.

Eng Zishiri was among several top managers that were laid off five years ago to cut costs and turn around the financially indisposed airline. He was made redundant after serving the airline for 30 years as aircraft engineering supervisor.

Last year, the airline lost 29 vehicles to its former sales and marketing manager, Mr Stephen Nhuta, after he attached the fleet to recover a more than $141 790,82 in retrenchment package.

Although Air Zimbabwe tried to stop the auction of the vehicles through an urgent application at the High Court, it lost the case.

The airline unsuccessfully appealed to the Supreme Court. In the latest case, Eng Zishiri, who was being represented by Mr Kelvin Musimwa of Musimwa and Associates, registered the award at the High Court on October 24 2012.

Chief Justice Godfrey Chidyausiku witnessed the writ of execution against the movable property two days later. The assets were removed from the company’s premises on Thursday last week and would be put under the hammer in due course.

Air Zimbabwe embarked on a retrenchment exercise in recent years after its labour pool had grown beyond sustainable levels, negatively impacting the financial performance of the airline.

Last year, the Supreme Court upheld the High Court’s decision that Air Zimbabwe was not covered under the provisions of the Finance Act which protects the attachment or execution of Air Zimbabwe (Private) Limited assets.

This opened a deluge of cases against the airline as laid off workers rushed to court to enforce settlement of their severance packages running into millions of dollars.