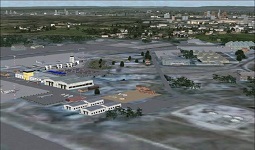 ZIMBABWE – Some of the illegal settlers who built houses on land reserved for the expansion of Harare International Airport, yesterday paid heed to the Harare City Council instruction to demolish their structures.

This comes after President Mugabe expressed displeasure over the structures while opening a section of the Joshua Nkomo Road (Airport Road) recently.

In an interview, Harare City spokesperson, Mr Michael Chideme, said they advised people to demolish their structures in order to salvage some household properties.

“We are happy that people are listening to us, we encourage them to destroy their houses on their own since they will save their window frames, windows, doors and tiles. At least they will not incur too much loses,” he said.

However, some of the residents said they would not vacate their premises as they wait for instructions from their cooperative leaders, who promised to stand by them in the face of the impending demolitions.

Mr Chideme, however, said: “Anybody who tries to resist that order will be dealt with. They will be forcing us to use our last resort which is demolitions. All we are saying is that we want the settlers to take heed to this advice and save their building materials from destruction.”

The illegal settlers conceded that they were once told to build temporary structures only, but proceeded to construct permanent houses.

“We were advised to construct temporal structures long back after ”murambatsvina” but we decided to build permanent structures now we are being told to vacate the place. It’s a terrible moment for us but we cannot avoid the predicament, we just have to follow the directive,” said some of the residents.

“We were supposed to be relocated to Stoneridge where we were allocated stands, but the problem is there was double allocation of stands. How do they expect us to live as four families where one stand is measuring 200 square metres” said one settler.

ZIMBABWE - Some of the illegal settlers who built houses on land reserved for the expansion of Harare International Airport, yesterday paid heed to the Harare City Council instruction to demolish their structures. The Herald yesterday witnessed the people ...
Share via
x
More Information