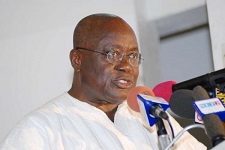 ZIMBABWE – Mugabe Maase , one of Ghana’s leading radio presenters said Nana Akufo Addo will lose his life before June the 1st that’s why he will never be President.

Mugabe Maase made this statement during a holiday stay in the uk during which he met members of the youth wing of the National Democratic congress at a special meeting.

He said Nana Addo is wasting his time campaigning to be President because spiritually, he will not make it because by June he will be gone .I am telling you I have him in my palm like an egg .I will squeeze it and God will do the rest for me!

He once again told the youth meeting that he had not granted any interview to any radio station in the UK and that all should ignore the attacks against him.

Solomon Mujuru will confront his killers, says his brother