ZIMBABWE – The Zimbabwe Stock Exchange boss, Alban Dhladhla Chirume, indicated that he wants the court to visit his house and make an inspection on the place where his former lover claimed she was physically abused.

Chirume, through his defense lawyer Beatrice Mtetwa, said they would make an application for an inspection in loco at his house to inspect the place where he is alleged to have physically abused his former lover, Susan Mutangadura.

Lawyer Mtetwa made the indication after she finished cross-examining Susan during their on-going trial.

The ZSE boss is denying ever committing the offence.

“We intend to make an application for an inspection in loco at the place where the incident occurred.

“We want the court to see where the complainant climbed.

“I think the application will come after the witnesses have testified,” said lawyer Mtetwa.

Lawyer Mtetwa finished cross-examining Susan who was insisting that Chirume physically abused her on January 3.

State counsel, Oscar Madhume, indicated that he was expecting to bring another witness when the matter continues on January 21.

State witness identified as Chigodora is expected to give his testimony.

The State alleges that Chirume removed Susan Mutangadura’s property from No. 41 Harare Drive to No.52 Borrowdale Road without her knowledge.

It is said that Susan only came to know of the development on January 3 at around 8pm after being told by their maid, Ruth Rusako.

Reports are that Susan drove to No.41 Harare Drive where she found the gate locked.

She was told by the security guard manning the gate that Chirume had instructed not to let her inside the gate.

It was when Susan decided to scale over the precast security wall to gain entrance into the yard.

Reports are that as Susan was in the process of scaling over the precast wall security wall, Chirume approached her and held her by the legs with intention to stop her entering the yard.

It is said that a scuffle ensued as Susan attempted to free herself.

Mutangadura is said to have sustained minor bruises on her both hands after the scuffle.

The State had it that Chirume insisted on blocking Susan from entering the yard which left her with paid.

Their neighbours reportedly intervened which ended up with Susan taking the matter to the police leading to the ZSE CEO’s arrest. 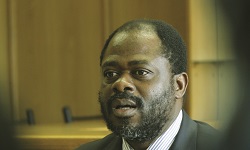 ZIMBABWE - The Zimbabwe Stock Exchange boss, Alban Dhladhla Chirume, indicated that he wants the court to visit his house and make an inspection on the place where his former lover claimed she was physically abused. Chirume, through his defense lawyer Beat...
Share via
x
More Information
x