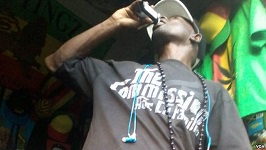 ZIMABWE – A minister of religion, Reverand Ray Motsi says Zimbabwe is grappling with alcohol abuse, which is devastating some families.

Reacting to a statement issued by the Botswana government to increase levies on alcoholic beverages by 10 percent with effect from December 21st, Rev. Motsi said drinking problems are also prevalent in Zimbabwe.

“I do handle a lot of families that are being broken because of alcohol abuse, using alcohol abuse as an excuse. So, I don’t think that it’s something we can encourage people to have because in my own opinion it does not encourage the kind of lifestyle that can rebuild the nation or build a person to have a better future.”

Rev. Motsi said he is currently handling a lot of devastated families. “I have got plenty right now concerning kids and concerning families that are on the verge of divorce because of that.”

Botswana said it was increasing levies on alcoholic beverages in an attempt to combat excessive alcohol consumption and abuse.

In a statement, the country’s Ministry of Trade and Industry said the levies will be increased from 30 to 40 percent.

The ministry said this is designed to create a culture of responsible drinking in the country.