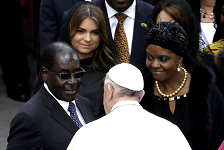 ZIMBABWE – I have seen it proper to write to His Holiness, Pope Francis with hope and trust that the respect which President Robert Mugabe has for the Catholic Church, he might possibly listen to you. The international community, African regional leaders and other key stakeholders (broader civil society) not forgetting the Zimbabwean mass itself; we have all failed to convince him to step down so that Zimbabwe can at least move forward.

Millions of innocent civilians are suffering in abject poverty in Zimbabwe because of government’s failure to take the country forward. These include ill policies which have destroyed our economy, human rights violations and serious crimes against humanity.

Thousands have been killed for their dissenting voices for the past three-and-a-half decades, forced disappearances, assassinations and butchering of defenceless civilians who are misinterpreted or perceived to be politically active against Mugabe’s government. All this is being done by a leader who calls himself a “devout Catholic”.

Most Holy Father, this makes me cry. Kindly talk to President Mugabe, for the sake of millions of innocent civilians suffering in Zimbabwe. We now have hundreds if not thousands of orphans, widows and widowers who lost their loved ones not because of any disease or what, but they were killed simply because they were perceived to be anti-Mugabe in mind. Your Holiness, don’t forget them in your prayers.

Your Holiness, may you kindly ask Mugabe to step down and allow Zimbabwe to move forward. Apart from human rights violations, crimes against humanity and the economic meltdown mentioned above, his age is no longer allowing him to continue holding such a higher office. He is now 91 years of age and no longer capable to hold such a political public office. He once fell at the airport because he can’t even walk properly anymore. A few weeks ago he read a wrong speech in Parliament and spent 25 minutes reading it down without even noticing that he was reading a wrong speech. His advanced age is no longer allowing him to perform his duties well as a Head of State. Many have advised him to step down but he does not listen to anyone leaving me with no option other than asking you to (for our sake) intervene and talk to Mugabe. We (Zimbabweans) have suffered enough.

Most Holy Father, I will conclude this letter by asking you to one day visit Zimbabwe. I know you have a very busy schedule, but we need your blessing. Our land has been defiled by the blood of innocent civilians mercilessly butchered by Mugabe’s administration during such periods as Gukurahundi genocide, 2000 bloody land reform which left some white Zimbabweans and their workers dead and the 2008 post-election violence to mention just a few. Our country needs cleansing, your visitation and your blessing is needed on our land.

Zim musicians lose out in Moz

ZIMBABWE - I have seen it proper to write to His Holiness, Pope Francis with hope and trust that the respect which President Robert Mugabe has for the Catholic Church, he might possibly listen to you. The international community, African regional leaders a...
Share via
x
More Information
x