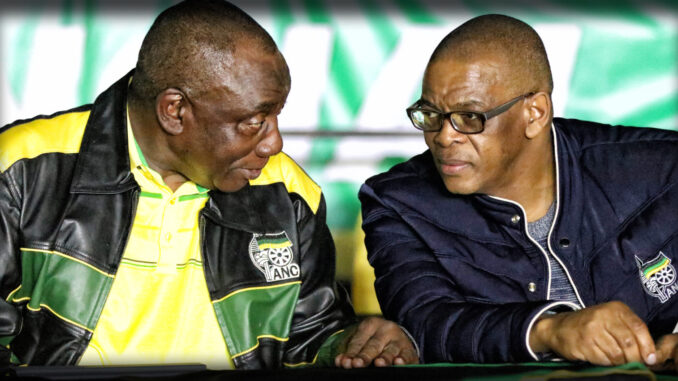 The delagation from South Africa’s ruling ANC is due to arrive in Zimbabwe on Tuesday as South Africa looks to understand the Zimbabwean political crisis.

Cyril Ramaphosa, the South African President, outlined that this delegation, led by ANC Secretary General, Ace Magashule is expected to meet President Mnangagwa and his ruling Zanu-PF party and other political players together with civil society.

This latest delegation comes at the backdrop of a disappointing visit by three special envoys who were reportedly blocked from meeting other parties by President Mnangagwa.

They are however, expected to return and this time meet other political parties including the Nelson Chamisa-led MDC-Alliance.

It remains to be seen how the government will respond to this latest call by the South African government and it’s ruling ANC party who have made it clear that indeed there is a crisis in Zimbabwe.

Ramaphosa recently admitted that the situation in Zimbabwe was increasingly spilling into neighbouring borders.

“As you correctly say we are having to deal with a situation on our borders, the concerns that you articulated we continue to feel them on our border and it is important that as neighbours that we are able to discuss these types of matters so that we see the extent to which we can be supportive of one another.”

“I wish to unequivocally state that there is no crisis in Zimbabwe as elections were held in July 2018 and a winner was declared in terms of the country’s constitution.”

This is also despite that various civil society groups in the country and international organisations have appealed to his government to accept the existence of a crisis and that be a starting point to the solving the issues facing the country.

Church organisations in Zimbabwe such as the Zimbabwe Catholic Bishops Conference among others have issued statements of concern on the prevailing situation in the country while recently, the Heads of Mission for UK, USA, Canada and other Western countries have urged the government to address the situation and respect the rule of law.

Advocate Nelson Chamisa and MDC-Alliance have maintained that Zimbabwe’s crisis is a result of the legitimacy issue that has been left unresolved since the controversial 2018 elections which took a Constitutional Court ruling to declare Mnangagwa the winner of the election.

MDC Alliance has maintained that the election was stolen from them.

The delagation from South Africa's ruling ANC is due to arrive in Zimbabwe on Tuesday as South Africa looks to understand the Zimbabwean political crisis. Cyril Ramaphosa, the South African President, outlined that this delegation, led by ANC Secretary Ge...
Share via
x
More Information