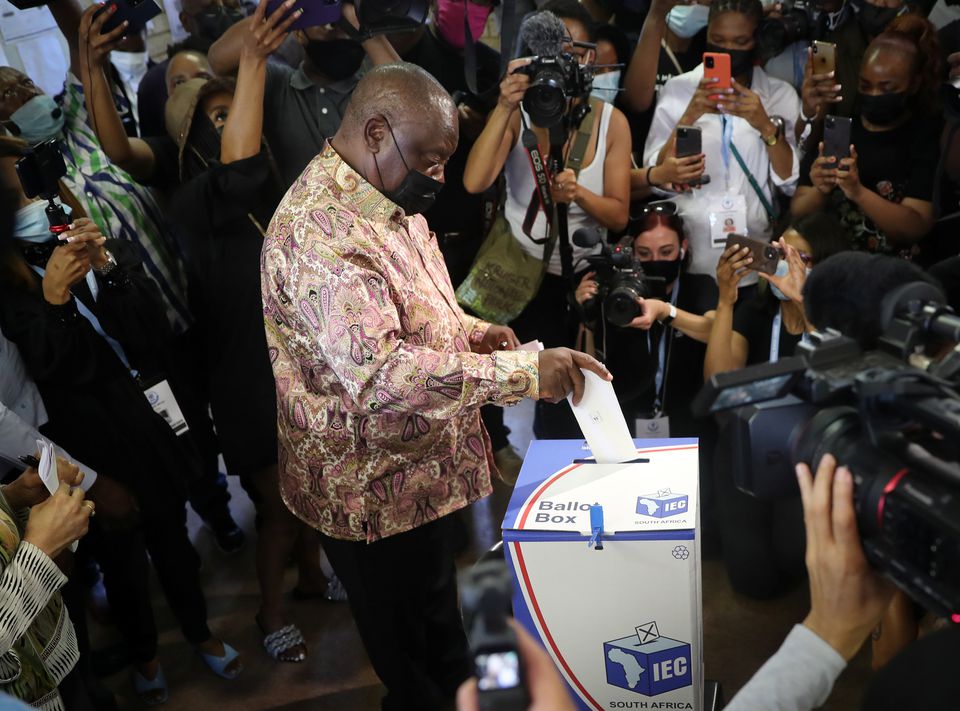 JOHANNESBURG – South Africans voted in municipal elections on Monday, with the ruling African National Congress (ANC) hoping to avert its worst result since the end of white minority rule.

There has been little reliable political polling, but based on the climate of discontent and the few surveys that have been conducted some pundits predict the ANC’s vote share could fall below 50% for the first time since the end of apartheid.

President Cyril Ramaphosa remains popular after mobilising government grants that prevented COVID-19 from becoming a hunger crisis. But lasting poverty, crumbling infrastructure and nearly a third of workers unemployed mean some voters have lost patience with the party that has ruled for 27 years.

“I have been very much loyal (to the ANC) for so many years because there were improvements but it’s not enough,” he said, adding he was changing his party of choice for the first time, for a new party led by former Johannesburg mayor Herman Mashaba.

Ramaphosa acknowledged that many voters were not happy, but called on them to support the party so it could improve.

“This is the one election where we are clearly saying to our people we are going to do better,” he said while voting in Soweto. “We’ve realised that we’ve not always met the aspirations of our people.”

The ANC hopes to win back metropolitan areas it lost to opposition-led coalitions in 2016, including in Johannesburg and Pretoria, when its 54% vote share was its worst since coming to power. read more

ANC defenders say reversing decades of apartheid-era neglect in Black neighbourhoods was never going to be a quick fix. But it has also been dogged by corruption scandals.

Getting less than half the vote would be a psychological blow, and would raise the previously unthinkable possibility that the ANC could one day be in opposition.

That still seems a way off. Its main rival, the Democratic Alliance (DA), has struggled to shed its image as a party of white privilege, and suffered a backlash in October from a divisive poster campaign addressing racial tensions between ethnic Indian and Black communities.

And despite widespread dissatisfaction, the ANC’s emotional hold on poor, Black townships remains strong, even among young voters with no living memory of apartheid.

“There is so much unfinished business, like the road, a hospital,” said Jonathan Mathebula, 20, queuing to vote in Diepsloot township north of Johannesburg. A main road promised by ANC councillors for years had never materialised, yet he said he said he would vote ANC.

Other parties include the Economic Freedom Fighters (EFF) – a Marxist group of former ANC youth leader Julius Malema – and ActionSA, Mashaba’s party. Mashaba has been branded a xenophobe because of his populist rhetoric against illegal immigrants, which he says has been misunderstood but refuses to tone down.

JOHANNESBURG - South Africans voted in municipal elections on Monday, with the ruling African National Congress (ANC) hoping to avert its worst result since the end of white minority rule. There has been little reliable political polling, but based on the ...
Share via
x
More Information