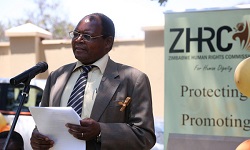 Other countries that tried to block the passing of the resolution, according to an organisation known as Frontline Defenders, were China, Russia, Syria, Burundi, Kenya, Myanmar, Nigeria, Saudi Arabia, North Korea, South Africa, Iran, Pakistan and Sudan.

At least 40 other countries abstained from the vote.

Norway led a cast of 117 progressive countries that valiantly fought to pass the resolution, including fighting of a campaign by a group of 39 African countries that wanted to sneak in “39 hostile amendments that would have severely weakened the position rights defenders”.

“I am not aware of the position taken and would need to meet with (Justice ministry permanent secretary Virginia) Mabhiza,” he said.

“We would also want to sit as a commission to evaluate that and come up with a proper position if indeed government voted against the resolution because our duty if to advise the State to ratify rights treaties,” Mugwadi said.

“We are not surprised. It is just a confirmation of what we know and have always said. Zimbabwe is a country that can easily descend into pariah status,” he said.

“As the watershed 2018 elections draw closer, the security situation in Zimbabwe will deteriorate and more and more human rights activists will just disappear. This regime will do whatever it takes to ensure they remain in power. This might sound alarmist, but then that’s the cold, hard truth,” he said.

“Zimbabwe has been known to target human rights defenders for fun and sport. This is a murderous regime that would want to live up to its billing. It is sad that at a time we have a new Constitution and a full human rights commission, we have the temerity to then turn around and vote against progressive resolutions in support of rights defenders,” he said.

Dewa Mavhinga, a senior researcher at Human Rights Watch, said it was extremely disappointing, but not surprising, “that Zimbabwe joined a cabal of rogue nations”.