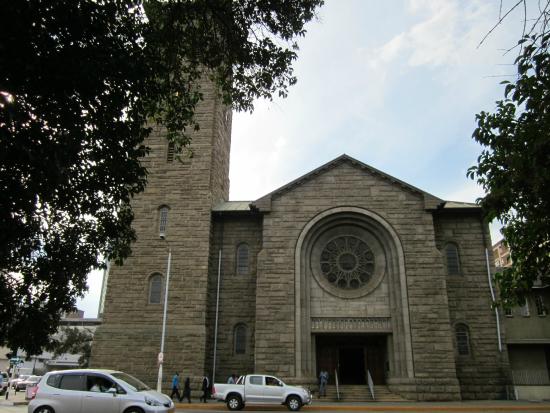 ZIMBABWE – Chaos erupted on Saturday at the Anglican Cathedral as congregants took arms demanding accountability for the funds meant for the church’s housing scheme that has not been finalised since 2015.

It is reported that many showed up holding placards demonstrating against Reverend Barnabas Munzvandi who is accused of receiving money from church members including some who are outside the country under the guise of securing residential stands for church members.

Munzvandi and two other fellow reverends, Seremani and Nyapokoto are also accused of collecting money but failing to pay rates to Norton Town Council.

Some of the placards read: “Please produce our title deeds, rate payers’ certificate, EMA certificate and site plan; without that rova pasi. “We want Munzvandi and his running committee out of our project. The land is ours.”

One of the victim said, “Rev Munzvandi wanted the issue of rates arrears to remain confidential and had no kind words for Council officials over allowing beneficiaries to access and enquire about payments and progress.

“We now want a financial audit to be carried out as well as making sure Rev Munzvandi and his committee resign.”

“They never gave us a financial statement, but were fooling us with unfulfilled promises in the name of peace when they are hyenas in sheep’s skin,” added another.

ZIMBABWE - Chaos erupted on Saturday at the Anglican Cathedral as congregants took arms demanding accountability for the funds meant for the church’s housing scheme that has not been finalised since 2015. It is reported that many showed up holding placar...
Share via
x
More Information