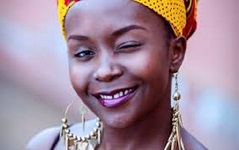 ZIMBABWE – As the big day draws closer, comedy fever grips Harare for the lovers of comedy.

Those who have watched short clips of Anne Kansiime have already purchased their tickets as she is expected to be in the country for but a day.

Popularly known as Kansiime, the Ugandan comedienne who recently won the African Entertainment Awards USA, Best Comedian’s Award announced on her Facebook page I will be with my Zim Ninjas creating some precious memories and cracking some ribs.

On her wall Kansiime’s crew wrote: “We have received the award and are over the moon about the news of yet another award for your Ninja girl Kansiime Anne; Best Comedian’s Award AEA USA.

“The nomination placed her among the best African contenders: Trevor Noah and Bright ‘BasketMouth’ Okpocha, but the win simply shows just how truly favored and chosen this Ninja girl really is.”

Zimbabwe: Anti-retrovirals but no food