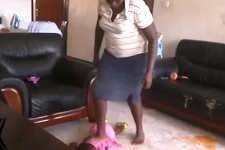 ZIMBABWE – Another horrific video has raised the ire of women on social media as a Turkish stepmother is captured on camera physically and sexually abusing a young boy.

The more than four minutes long video that contains graphic images of violence and abuse shows the woman using a stick to beat the toddler, sodomising the boy with the stick , shoving him, beating the young boy with the stick on the head, and forces it (stick) down the throat.

The woman continues to brutally attack the helpless boy, throws him hard on the floor and even steps on the boy before dragging him.

The cruel stepmother also beats the boy on the soles of his feet and at one moment appears to cover his mouth, suffocating him.

The video that has gone viral seems to have invoked sad memories of another video of a brutal Ghanaian maid who was captured force-feeding a toddler and beating the girl after she vomited.

The woman slammed the young girl to the ground, then stepped on the child with her full weight and kicked the girl in the head.

“You run the risk of being turned into another demon yourself after killing that person,” reacted one woman on Facebook.

“I would kill this woman and would rather go to jail. What has gone wrong with women, how could one be so cruel to such a helpless and innocent soul.

“I’m touched and I have been crying all day after watching this video. It really seems far from home, like to think the women is in Turkey, but this could also happen to my own child if I die and he or she is left under the care of a stepmother.

“I can’t stop crying, Lord the world is so cruel,” added another woman on a Facebook group.

The video has gone viral and has led to outrage across the world.

ZIMBABWE - Another horrific video has raised the ire of women on social media as a Turkish stepmother is captured on camera physically and sexually abusing a young boy. The more than four minutes long video that contains graphic images of violence and abus...
Share via
x
More Information