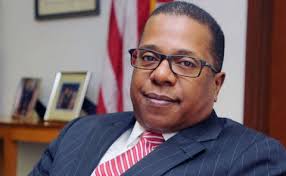 HARARE – The United States Ambassador to Zimbabwe, Brian Nichols has labeled the Anti-Sanctions Solidarity Day organised by the Zanu-Pf led government as designed to distract the people of Zimbabwe from the real causes of problems the country is facing.

He was speaking during an interview with one local publication when he made the comments which come just a few days before Zimbabwe and SADC commemorate the Anti-Sanctions Day on the 25th of October.

“Last year’s Anti-Sanctions Solidarity Day events, I think were very much designed to distract the people of Zimbabwe from the real causes of the problems in this country,” he said.

He further added that, “And I think if the government of Zimbabwe put the energy that they put in to organise these types of events and generating statements from other SADC members into persuing the reform agenda that the government of Zimbabwe campaigned about, talked about 3 years ago in November 2017 and in 2018 at the inauguration of His Excellency, The President. They would have advanced further in that reform agenda.”

He also added that this was an exercise that does not serve the great good of Zimbabweans.

Zimbabwe and the rest of the region are set to celebrate the Anti-Sanctions Day again this year in a bid to force the Western countries led by USA to lift the sanctions imposed on the country since early 2000s.

The Zanu-Pf led government has continued to blame these sanctions for the bad state that the country finds itself in.

This is reminiscent of the Mugabe era where poor leadership was masked by an attack on the West and using the imposed restrictions to mask up the government’s failures.

President Mnangagwa upon ascension to power promised to make the necessary reforms that would facilitate the lifting of sanctions and also enhance the relations with the international community after years of isolation.

However, more than 3 years on, not so much ground has been covered to warrant the removal of the sanctions.

HARARE - The United States Ambassador to Zimbabwe, Brian Nichols has labeled the Anti-Sanctions Solidarity Day organised by the Zanu-Pf led government as designed to distract the people of Zimbabwe from the real causes of problems the country is facing. He...
Share via
x
More Information