ZIMBABWE – The fame and influence of veteran actor Lawrence “Bhonzo” Simbarashe has been whitewashed by his current status and situation. The once-rich celebrity has landed at the bottom of the pit. Bhonzo’s story is no longer news, as social media is awash with tales of how the actor is surviving on hand-outs.

But Bhonzo’s case is just a tip of an iceberg as a number of local artistes have also failed to utilise their chances while their careers still soared. These artists, despite the fame they accrued during their heydays, are now living miserable and unexpected lives. The “love of women” and mismanagement of fans are some of the factors that contributed to the waning of fortunes for most of these artistes, while others have been blaming piracy and the economic environment in the country for their misfortunes.

The Standard Style traced some of the once-popular artistes who have slipped off the radar to a state of misery. One question remains unanswered: are these artistes cursed or is it that the arts industry is just not paying well?

The forgotten musician is now a popular figure at the outdoor leisure spot, KwaMereki, from where he sells pirated discs. During his peak, Tangwena was one of the best rhumba musicians in the country. His videos were popular on national television where they mainly featured on the musical programme Mvengemvenge/Ezomgido. He also commanded a huge following in rural areas.

The Honde Valley-born musician, who has always been a vendor, took to music in 2000 and successfully announced his arrival on the showbiz scene with the hit, Pamuchato Wamukoma and recorded a video of the same track that was characterised by raunchy and well-choreographed dance moves.

He released more songs, among them Ndiyani. In an interview a few years back, Tangwena blamed promoters for being opportunists “who suck out blood from musicians”.

He is famed for releasing one of the country’s longest songs — Ndini Uyo — that plays for 25 minutes. He experimented on the song by writing it as a love story in which he asked various musicians to sing love songs for his estranged lover. In the song, Jambo mimics the choruses of various musicians that included Simon Chimbetu, Oliver Mtukudzi and Thomas Mapfumo, among others. He succeeded and the song became a hit. Jambo, the man behind the 1989 hit Vimbiso, just like Tangwena, sells various wares and CDs — mainly Zimbabwean music CDs — at a market place in Thohoyandou, Limpopo Province in South Africa. He worked with Admire Kasenga, Cephas Mashakada and the famous Zimbabwe Chachacha Kings. He is one of the few living Sungura Boys members. Despite being one of the best sungura musician in Zimbabwe, the once-famed artist is now a shadow of his former self. He is, however, on record denying having fallen on hard times.

The new millennium saw the advent of urban grooves — a genre that was popular with the urbanites. However, failure to mention the name Jamal Nyika Mataure, it would be injustice as the late musician played his part towards the rise of the genre. His combination with Betty Makaya was a marvel, but his last days were bitter and by the time he passed away, he was in a very difficult situation. Jamal is the male voice in the hit song Kurwizi, a duet he did with Betty. He was a renowned producer and keyboard player. He died in Mutare with those who were taking care of him getting assistance from well-wishers. Musicians like Hosiah Chipanga and Brian Samaita were among those who donated goods and cash during Jamal’s last days.

The name Patrick Mukwamba might not be known by many from the current generation, but the veteran musician’s song Wapenga Nayo Bonus (Jonas) is still appealing, especially during the festive season. Despite owning a house in Unit K, Chitungwiza, Mukwamba relocated to Rusape in search of greener pastures while earning a few dollars from rentals. Living in a rented apartment, the ageing musician took five years to release his album titled Call Me Back. He was quoted saying he failed to secure $10 meant for transport for the instrumentalists who by then were supposed to travel from Harare.

In Rusape, he even tried sculpturing, but business was not as brisk as he had anticipated. The Usanyare Basa Raunoita hitmaker lives a life that does not correspond with his yester-year fame and in 2014 he blamed the late Marshall Munhumumwe for his downfall. At 71, many would expect Mukwamba to be resting and enjoying the fruits of his work, but that is not the case.

Some of Mukwamba’s songs include Tenga Gumbeze, Zvinonaka Zvinodhura, Dai Ndiri Shiri, Vambozha Vauya and Sara Mwana Wandaida. He recorded most of the songs with the backing of the Four Brothers who were resident at Machipisa Nightclub in the 1980s. Mukwamba could not join the group during live performances because the club wanted only four people and that was the reason why he blamed Munhumumwe, accusing him of bringing him down. But even after the death of the Kumawere hit-maker, Mukwamba failed to rise from the dust. Ironically, he sang about bonus but there is still no bonus for him for all the years he spent as a musician.

The Bhundu Boys frontman, who stayed in the United Kingdom and at one time shared the stage with Madonna at the majestic Wembley Stadium, died and left his family in abject poverty.

After a stint in UK, Tembo returned home before a bank repossessed their house due to mortgage arrears. This was after the Bhundu Boys had disbanded and Tembo would not hold shows like before.

After his death, Tembo’s wife, Ratidzai went to stay with her mother in Mbare briefly before she moved her children to their rural home in Zvimba because she could not afford to pay rentals, school fees and buy food. Ratidzai became a vendor.

However, the rise of Biggie Tembo Junior has brought hope to the family as he now secures money to fend for the family. Ratidzai now owns a pre-school in Westgate. 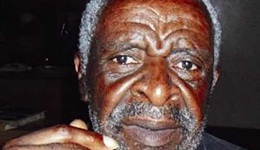 Artistes' journey from fame to misery

ZIMBABWE - The fame and influence of veteran actor Lawrence 'Bhonzo' Simbarashe has been whitewashed by his current status and situation. The once-rich celebrity has landed at the bottom of the pit. Bhonzo's story is no longer news, as social media is a...
Share via
x
More Information
x