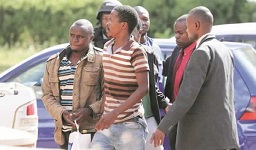 ZIMBABWE – A political party leader and three of his colleagues who arrested while trying to petrol bomb the First Family’s Alpha Omega Dairy farm in Mazowe appeared in court yesterday.

They are facing possession of weaponry for sabotage and money laundering for terrorism purposes charges.

Mr Chikwekwe remanded the quartet to February 8 and advised them to apply for bail at the High Court.

The court heard that Ngwenya and Makumbe are attached to 1 Field Regiment and Zimbabwe Intelligence Corps, respectively.

The prosecutor Mr Michael Reza alleged that on Friday last week at around 4pm, police received a tip off that the quartet was planning to bomb Alpha Omega Dairy’s processing plant and tuck shop during the night.

The dairy’s processing plant and tuck shop are located at Gushungo Dairy Estate, Jumbo Road in Mazowe and the property belongs to the First Family.

Acting on the tip off, the police proceeded to the farm and laid an ambush about 100 meters from the quartet’s target.

Around 10pm, the detectives saw the men approaching the dairy’s processing plant and immediately effected an arrest. They searched them and recovered four Molotov cocktails (bombs) made of petrol, ammonium nitrate, nails and sand in 750 millilitres Chateu empty bottles.

It is alleged that the quartet held several meetings to acquire funding during their preparation to carry out the banditry, terrorist and sabotage activities.

The quartet made voluntary indications to the police on Sunday.