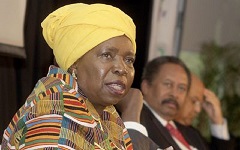 After bemoaning the dehumanisation of Africans, the 91-year old Zimbabwean leader — in power for 36 years — controversially confirmed his president-for-life intentions: “I will still be there until God says, come join the other angels.”

Mugabe then called for greater African representation on the 15-member UN Security Council, before suggesting that the UN Secretariat be moved from New York to China, India or Africa. He then told Ban “You’re a good man … but we can’t make you a fighter”.

Ban was attending his last AU summit to bid farewell to the continent. He praised the efforts of African peacekeepers in Somalia, and health workers in tackling the Ebola outbreak in West Africa.

Ban’s decade in office has, however, not been memorable, and he has confirmed the desire of the powerful members of the Security Council to have a “secretary, rather than a general” in the position.

As was said about his Peruvian predecessor, Javier Pérez de Cuéllar, the uncharismatic Ban would not make waves even if he fell out of a boat. Under the South Korean’s leadership, collaboration between the UN and the AU has also been strained in Mali, Darfur and the Great Lakes.

Although cagey about her future, AU Commission chairwoman Nkosazana Dlamini-Zuma of SA may also soon be a political ghost in AU terms.

She is widely expected to leave in July at the end of her four-year term, eventually to run for the African National Congress presidency in 2017.

She again pushed her pet projects at this summit: the Agenda 2063 vision of a borderless Africa in which human rights are respected and gender parity is achieved.

The summit was dominated by AU efforts to “silence the guns” in Africa.

Burundi was the central issue, with the 15-member AU Peace and Security Council having mandated a 5,000-strong military intervention force to halt instability, in which about 400 people have died and 230,000 refugees have fled into neighbouring countries.

AU leaders, however, refused to approve the force, which has been vociferously opposed by third-term Burundian President Pierre Nkurunziza.

They called instead for mediation and more human rights monitors.

In South Sudan, three past presidential political ghosts are involved in mediation efforts: SA’s Thabo Mbeki, Botswana’s Festus Mogae and Mali’s Alpha Konaré, reinforcing the saying that too many cooks spoil the broth.

Another presidential political ghost — Tanzania’s recently retired Jakaya Kikwete — was appointed as the new AU special envoy to Libya in a bid to support UN efforts to unite the country’s fractious parties.

At the same time as the summit, another political ghost, former Ivorian president Laurent Gbagbo, was being tried by the Hague-based International Criminal Court (ICC) for war crimes — the first head of state to be brought before the court (Liberia’s Charles Taylor was tried and convicted before a special international court).

With all eight of the ICC’s cases being in Africa, Kenya — strongly supported by Ethiopia and Chad — led efforts to adopt a road map for the withdrawal of African governments from the court.

SA reportedly repeated its intention to do so following widespread criticism of its hosting of Sudanese President Omar al-Bashir — wanted by the ICC on war crimes charges — at an AU summit last year.

There was an attempt to revive yet another political ghost: the African Peer Review Mechanism.

SA’s Eddy Maloka was appointed as its CEO, but only 17 out of 35 countries have been reviewed in 13 years, even as the body struggles financially.

The rivalry between SA and Nigeria also continued, with both winning seats on the AU Peace and Security Council.

Mugabe handed the chair of the AU to Chadian warlord President Idriss Déby, who has been in power for 25 years.

Déby lambasted the organisation for relying too heavily on external support for more than 90% of its security needs.

As he memorably put it: “Our organisation acts as it has for the past 20 or 30 years: we meet often, we talk too much, we always write a lot, but we don’t do enough, and sometimes nothing at all.”