‘Australia willing to work with govt’ 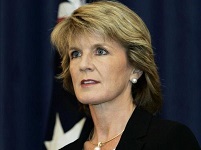 ZIMBABWE – THE Australian government says it is prepared to work with a Zimbabwean government that is committed to peace and the general wellbeing of its people, but could not disclose what Harare was expected to do before resumption of normal diplomatic relations..

Australian Foreign minister Julie Bishop could yesterday not be drawn into disclosing whether her government was in the process of normalising diplomatic relations with Harare through recent re-engagement efforts by its ambassador in Zimbabwe, Suzanne McCourt.

In an interview after her presentation at the Paydirt Africa Down Under mining conference in Perth, Bishop skirted around the issue, preferring to say they would want to see a peaceful and prosperous Zimbabwe.

“As far as Zimbabwe is concerned, Australia would like to see nothing more than a peaceful and prosperous Zimbabwe,” she said.

“There are many Zimbabweans living in Australia and indeed many of them living here in Western Australia. We have long ties going back to many, many years.

“Australia is prepared to work with a Zimbabwean government that is committed to the peace and prosperity of the Zimbabwean people.”

She added: “I know Australian companies are interested in investing in Zimbabwe. Zimbabwe has so much potential as a country with so many resources. It was once the breadbasket of southern Africa. We would like to see nothing more than to see Zimbabwe realise its full potential. So we appreciate that there are many challenges in Zimbabwe, but there is great affection between the people of Australia and the people of Zimbabwe and we hope we can play our part to Zimbabwe returning to a much more prosperous situation than it is in.”

Speaking at the same event, McCourt said Australia and Zimbabwe’s relations were on track and her government was committed to re-engagement with the Zanu PF government.

Australia, which introduced sanctions against Zimbabwe in 2002 after being angered by Mugabe’s land reform programme and electoral fraud, has been gradually relaxing the restrictions but maintains a travel and trade embargo on the First Family and five service chiefs since 2013.

Australia has provided AUS$207 million in aid to Zimbabwe since 2009. It has also provided support in water and sanitation, to small-scale farmers, direct assistance to Zimbabwe communities through Australian non-governmental organisations projects, scholarships, cultural activities and community projects through small grants programmes.

It has also provided support to the national census and constitution-making process that produced a new governance charter.

In June this year, an Australian mining business delegation visited Harare where it met with government officials and discussed possible investment deals.

However, mining executives at the just-ended Africa Down Under conference in Perth raised concern over investor-unfriendly policies in Zimbabwe such as the indigenisation legislation, which they said scares away investors.

The indigenisation legislation stipulates that at least 51% of business should be in the hands of locals.

Although foreign direct investment inflows into Zimbabwe increased to $545 million last year from $400 million in 2013, the figure still fell far behind most regional countries.

Bishop said Australian mining companies would seek to invest in countries where the conditions are the most attractive.

“They are like any other form of global capital. They will go into the most attractive conditions and invest.
“So it is in the interest of African countries looking for global investment, including Australian investment, to have the most attractive environment for business that includes transparency, no corruption, an opportunity to obtain licences freely and fairly subject to appropriate regulatory frameworks , mining standards and environmental standards and other standards,” Bishop said.

“So I think Australian companies are well positioned to make judgment to where they wish to invest.”

She added that: “Our message, of course, to African nations looking for foreign direct investment if they are wishing to compete with other regions of the world also looking for that mining-related investment is to ensure that the government standards are high, transparency is an integral part to their government and that corruption is stamped out. I am pleased that a number of African countries are making significant progress.”

'Australia willing to work with govt'

ZIMBABWE - THE Australian government says it is prepared to work with a Zimbabwean government that is committed to peace and the general wellbeing of its people, but could not disclose what Harare was expected to do before resumption of normal diplomatic r...
Share via
x
More Information