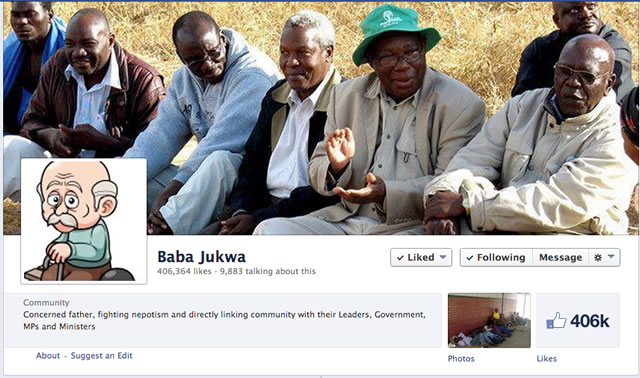 ZIMBABWE – JOURNALISM charlatan, pretender and impersonator Edmund Kudzayi largely seen as the proprietor of the now defunct infamous “Baba Jukwa” Facebook page, has been fired by Zimpapers barely a month after being reassigned as the head of Digital Services.

Kudzayi was given his marching orders on Wednesday. The basis for his firing was not clear but it is believed he was given a three-months termination of contract notice which does not require the employer to proffer any reasons. The burly and trigger-happy Kudzayi was part of a coterie of individuals recruited by then Minister of Media, Information and Publicity Professor Jonathan Moyo when he was reappointed Minister in 2013.

His appointment as Editor of The Sunday and that of Mduduzi Mathuthu at The Chronicle created a lot of friction at Zimpapers especially from career journalists who viewed the two as “impersonators” with no experience in the journalism profession. Even those in the ZANU PF establishment were also shocked given Kudzayi and Mathuthu’s recorded history of being anti-establishment. Mathuthu is the proprietor of the rabidly anti-ZANU PF website, NewZimbabwe.com while Kudzayi used to run The African Aristocrat, which at one published spurious reports of Bona Mugabe having been gang-raped in Singapore.

Soon after his appointment at The Sunday Mail, Kudzayi boasted of being on “solid” ground and claimed that he could only work with seven journalists as the newsroom was unnecessarily bloated. He also exposed his lack of understanding of the paper’s editorial policy and general news values when he instructed that reporters should investigate how the Central Intelligence Organisation and the Presidential Guard was trained.

As a way of currying cover with the system and probably wanting to wash away his footsteps, Kudzayi proffered to assist the Zimbabwe National Army in unmasking “Baba Jukwa” and wrote stories in The Sunday and The Herald claiming that he had found the real “Baba Jukwa” in Mkhululi Chimoio, a Zimbabwean journalist based in South Africa.

Tables were turned when the “system” turned its hit on Kudzayi accusing him of being the online character whose feat was to forecast the deaths of prominent ZANU PF politicians including revealing minutes of closed door meetings. As the investigations progressed, Prof Jonathan Moyo and Saviour Kasukuwere were both called for questioning by police as they sought to establish their links with Kudzayi.

Kudzayi stayed on remand for over a year before the state struck him off saying it will proceed by way of summons. Kudzayi celebrated this reprieve as some kind of exoneration saying the allegations were laughable and a clear abuse of the criminal justice system.

“This is clearly a trial and error by the State in seeking to resolve the Baba Jukwa mystery. The State is stabbing in the dark hoping along the way as they arrest innocent people like (me) and victimizing the same, they would get the real Baba Jukwa. This is a clear lie. I am not Baba Jukwa at all,” Kudzayi said then.

However, the truth is that the State reached a dead-end after Google in United States failed to cooperate in providing information regarding the identity of the person who opened the website. Realising that the net was closing on them, Moyo and Kasukuwere then masterminded a media blitz using both The Herald Editor Caesar Zvayi and Mathuthu to malign former Vice President Joice Mujuru and her perceived supporters like Didymus Mutasa who at the time was the Minister of State Security.
The eventual sacking of Vice President Mujuru and Mutasa literally meant the falling away of the “Baba Jukwa” case, which now the system is now keen on reopening.

Although Zimpapers CEO Pikirayi Deketeke is said to have been not keen in firing Kudzayi, reports suggests that he was pressured by Ministry of Media, Information and Publicity George Charamba to relieve the guy of his duties. Charamba felt that Kudzayi’s continued stay at Zimpapers was untenable given the charges that he earlier faced. Reports also suggest plans to purge all Moyo’s poodle-dogs are on the way with the system currently working on Mathuthu. Even Zvayi, who at whim used to undermine Deketeke because he was Moyo’s blue-eyed boy, is also not safe.

ZIMBABWE - JOURNALISM charlatan, pretender and impersonator Edmund Kudzayi largely seen as the proprietor of the now defunct infamous “Baba Jukwa” Facebook page, has been fired by Zimpapers barely a month after being reassigned as the head of Digital S...
Share via
x
More Information
x