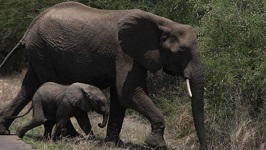 ZIMBABWE – Condolences have been pouring in for a tiny elephant who died despite the best attempts of a sanctuary in Zimbabwe to save him.

“Breathe now your soul, Africa. Rest in peace. It was a brutal battle that you fought, from beginning to end,” she posted.

Africa was found alone, “covered in blood” and “utterly confused and terrified” last month on the edge of Hwange National Park, in western Zimbabwe, the site of a spate of horrific cyanide poisonings of elephants in late 2015.

He was believed to be only a few weeks old.

The fate of his mother and the rest of his herd was not known. He was airlifted to Harare.

His body has been sent for a post mortem as carers try to pinpoint why he succumbed, Danckwerts said on Facebook.

“Whilst we are all reeling in shock and grief, it is very important that we try to find out more,” she posted.

Her page was flooded with messages of support and grief.

Though described as “very fragile indeed” on January 27, Africa was photographed interacting with other elephant “orphans” at the nursery.

His death will come as a huge blow to the many from around the world who eagerly follow the tales of the elephants at the nursery, which was visited by Chinese President Xi Jinping in December.

Meantime the independent Bhejane Trust, which operates in the Victoria Falls and Hwange areas reported on Thursday the unusual and tragic death of a young elephant bull in the Zambezi National Park.

The trust said the bull had fallen, broken its leg and then “spun round and round… pushing out a sand bank evenly all the way around the edge, before eventually succumbing. Obviously a slow, terrible death.”

Though in some areas of the country there are believed to be too many elephants, populations in the Zambezi Valley were reportedly down by 40% at the end of 2014, mainly because of poaching.

ZIMBABWE - Condolences have been pouring in for a tiny elephant who died despite the best attempts of a sanctuary in Zimbabwe to save him. Zimbabwe Elephant Nursery (ZEN) founder Roxy Danckwerts announced the death of little Africa on Facebook on Monday in...
Share via
x
More Information