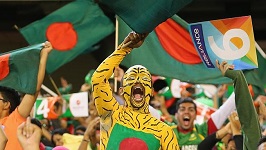 Zimbabwe won the toss and elected to bat first against Bangladesh in the 1st ODI. The home team lost two wickets early on and were reduced to 30 for two inside nine overs. Litton Das and Mahmudullah were the two batsmen dismissed. Das was removed for six-ball duck.

Zimbabwe and Bangladesh are currently locked in three-match ODI series and then will play two T20Is as well. Bangladesh has been in good form this year defeating Pakistan, India and South Africa at home.

On the other hand Zimbabwe have had a dejected year and recently lost to Afghanistan. The African nation was defeated by minnows Afghanistan in both the ODI and T20 series. The team will now be hoping to dish out some strong performance on the Bangladesh tour.

Bangladesh vs Zimbabwe 1st ODI 2015: live score and ball by ball commentary of …