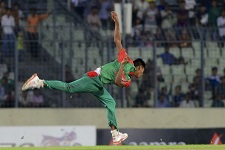 By winning the second ODI against Zimbabwe at the Sher-e-Bangla Stadium, the Bangla Tigers recorded their 12th ODI victory in a calender year, which is itself a record for them. Adding to that, Bangladesh remained undefeated in the 50-over format at home as they have won all their games since February 2014.

Having won the three-match ODI series already, skipper Mashrafe Mortaza and coach Chandika Hathurusinghe can afford to experiment with the squad. Meanwhile, Zimbabwe have nothing to lose and they will play for nothing but pride on Wednesday at the same venue.

It is not that the Zimbabwean bowlers have bowled poorly in this ODI series. The likes of Tinashe Panyangara, Graeme Cremer and others have bowled economically. But they have failed to pick up the most important wickets that cost them both the matches — in the first ODI, the wicket of Mushfiqur Rahim and in the second Imrul Kayes.

The Bangladeshi bowlers have been right on the money in this series so far, especially, the spinners. Shakib Al Hasan picked up a fifer in the first ODI and completely ran through the Zimbabwean lineup. In the second ODI, Al Amin Hossain, Nasir Hossain and Arfat Sunny picked up five wickets between them. It did not make much of a difference to Bangladesh in the absence of their best all-rounder Shakib who flew to USA in order to be with his wife as she gave birth to a lovely daughter.

For Zimbabwe, batting seems to be a point of serious concern. Other than skipper Elton Chigumbura, no other batsmen could withstand the pressure and they have all thrown their wickets away at regular intervals. That has given the Bangladeshi bowlers an extra impetus to attack even more and push the visitors to their back-foot.

TV Listings – There will be no live coverage of the match in India. Viewers in Bangladesh can watch the 2nd ODI live on Gazi TV and fans in Zimbabwe can tune into Ten Sports.

ZIMBABWE - The stadiums in Bangladesh are like well-guarded forts that no one can trespass. Bangladesh have managed to win yet another ODI series on the home soil against Zimbabwe. By winning the second ODI against Zimbabwe at the Sher-e-Bangla Stadium, th...
Share via
x
More Information