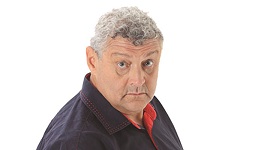 ZIMBABWE – Organisers of the forthcoming South African and world acclaimed stand-up comedian Barry Hilton’s show at Reps Theatre, Belgravia, in Harare on February 27 said about 75% of the tickets have been sold.

Hilton’s Zimbabwe performance is part of his 2016 global tour that kicked off with a three-city tour of Australia, where he performed in Brisbane, Perth and Sydney.

Speaking to NewsDay yesterday, one of the show organisers, Tonderai Mwaita of Xtratime Entertainment, said preparations for the show were at an advanced stage, with everything moving according to script.

“Comedian Barry Hilton will be bringing his latest comedy show, Evolver, to Harare, Zimbabwe at Reps Theatre and tickets for the show are selling fast with only 25% remaining, having sold about 75%,” he said.

“With his phenomenal instincts and technical skill as a performer, comedy lovers are guaranteed of a rib cracking show, so I urge them to purchase their tickets on time to avoid the last minute shove.”

Mwaita said although comedy is progressively growing in Zimbabwe, if it receives more support from locals, Xtratime are committed and will continue bringing in top comics.

He said tickets for the concert are selling at The Reps Theatre in the capital and online on www.thespotlight.co.zw

Hilton’s performance comes on the heels of a show by Ugandan comedian Anne Kansiime, who gave a scintillating act at 7Arts Theatre in November last year.

With a track record of 30 years in comedy, Hilton, an entertainer, motivational
speaker and actor, has remained at the top by continually coming up with fresh material.

His universal appeal has created a global fan base through tours in America, Hong Kong, London, Ireland, Amsterdam, Switzerland, Australia, New Zealand, Mauritius, Africa and even at sea on international cruise liners, highlighting his ability to cut through all boundaries and appeal to any nationality, race or age.

Hilton, who was born in Zimbabwe, before his family moved to North Wales and later South Africa in the 1960s, has starred in two movies, produced five stand-up comedy DVDs, hosted TV talk shows and featured in numerous TV commercials.

His training on the comedy circuit alongside the likes of John Cleese, Billy Connolly and Bob Monkhouse has made him a global icon in comedy.

ZIMBABWE - Organisers of the forthcoming South African and world acclaimed stand-up comedian Barry Hilton’s show at Reps Theatre, Belgravia, in Harare on February 27 said about 75% of the tickets have been sold. Hilton’s Zimbabwe performance is part of...
Share via
x
More Information