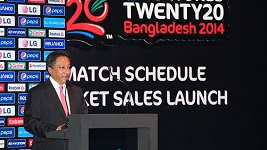 BCB president Nazmul Hassan has said that the cricket operations committee-proposed solitary Bangladesh-Zimbabwe Test in January is unlikely to take place. Instead, he has suggested that the one-off Test could take place after the World T20, in May or June.

Hassan, who underlined the challenges of playing two different formats in the span of a few weeks, said he wanted to consult the Bangladesh players and head coach Chandika Hathurusingha about the matter before discussing it with the board.

“Basically the cricket operations [committee] told me that they want the team to play both Test and T20s [against Zimbabwe in January],” Hassan said on Friday. “But the problem is they [BCB’s cricket operations] want the T20 first and then the Test match; so to play a Test before the Asia Cup T20 won’t be possible. There’s problem with the grounds too, since the Under-19 World Cup will be ongoing.”

Hassan is worried about the lack of time to accommodate such a schedule as well. “Zimbabwe won’t be arriving before January 14 [after finishing their away series against Afghanistan]. They have responded to the Test proposal by saying that they want to play only T20s. They have to send two separate teams for Test and T20s, like many nations. We more or less have the same team. If they can’t come before January 14, the problem will be quite big.”

Another hindrance to the proposed one-off Test could be a lack of frontline personnel for Bangladesh. Shakib Al Hasan, Mushfiqur Rahim and Tamim Iqbal are set to take part in the Pakistan Super League from February 4 and Hassan said it was “absurd” to even think of playing a five-day game without them with ICC rankings on the line.

“We want to play T20s but Tamim, Shakib and Mushfiqur will be playing in the Pakistan League at the same time. Will I play Test against Zimbabwe without them? It is just absurd. We have to understand that ranking points is very important. If we win against them, we get nothing. But we lose six points if we lose to them. So we have to keep that in mind too.”

There is the option of scheduling the Zimbabwe Test before the T20s, but considering the calendars of both teams would be relatively free after the World T20, Hassan felt there was no need to rush things.

“The players may say, ‘we don’t want to play Test just before the Asia Cup T20’. They may want to play the Test first. We are not denying that Test cricket is necessary, good and important. We are playing more Tests than previous years.

“We will play this [Zimbabwe] Test in May or June. There’s no reason to worry about it. We will discuss with everyone what’s best for the team. We are both available for a long time [after the World T20]. We have time to play Test cricket.”

Hassan bolstered his argument to retaining a full T20 series by saying West Indies were also interested in playing Bangladesh in January. So the BCB may consider a Bangladesh-Zimbabwe-West Indies tri-nation series.

“A third country is also interested to play T20s when we will play against Zimbabwe. We will arrange something. West Indies has shown interest. If it is a tri-nation, it will be of a different format. It is very hard to say anything now,” he said.