In a statement yesterday, the Ministry of Information, Media and Broadcasting Services, wished the President  good health.

“On the occasion of your 92nd birthday, the Minister of Information, Media and Broadcasting Services, Dr Christopher Mushohwe, Deputy Minister, Cde Thokozile Mathuthu, Permanent Secretary, Cde George Charamba, and the entire ministry staff, offer to you our warmest congratulations and best wishes of happiness, continued good health and more strength.

“We are privileged to serve the country as purveyors of information under your wise leadership and counsel. Rest assured of our commitment to fight and defend the gains of our Independence, National Sovereignty, National Unity, Peace and Development (Zim-Asset) through effective information management guided by national outlook and pan African philosophy. Makorokoto Cde President! Amhlophe! Congratulations!,” reads the statement.

Said Zesa Holdings in a statement: “The board, management and staff of ZESA Holdings and its subsidiary companies, the Zimbabwe Power Company (ZPC), Zimbabwe Electricity Transmission and Distribution Company (ZETDC), PowerTel Communications and ZESA Enterprises join the nation and the First Family in congratulating the President of the Republic of Zimbabwe, Head of State and Government, Commander in Chief of the Zimbabwe Defence Forces, Cde Robert Mugabe on his 92th birthday. We wish him many more years of good health. Congratulations! Makorokoto! Amhlophe!”

The steel making firm, Ziscosteel, also joined the rest of the companies in wishing the President many more years of leadership.

Said the company: “The chairman, board, group chief executive officer, management and staff of the Ziscosteel group of companies would like to join the First Family and the nation at large in congratulating the Head of State, Government and Commander in Chief of the Zimbabwe Defence Forces Cde Robert Mugabe on his 92nd birthday. We wish His Excellency many more.”

Said the Minerals Marketing Corporation of Zimbabwe; “MMCZ’s General Manager, management and staff extend profound congratulations to the Head of State and Government and Commander in Chief of the Defence Forces, His Excellency Cde Robert Gabriel Mugabe on his 92nd birthday. May the Almighty Lord keep gracing you to continue leading the nation of Zimbabwe. Long live Gushungo! Congratulations, Makorokoto, Amhlophe!”

The Ministry of Finance and Economic Development, said economic empowerment would have taken long without the leadership of President Mugabe.

“The Ministry of Finance and Economic Development, Hon Patrick .A Chinamasa (MP), Permanent Secretary, Mr W. L Manungo and the entire staff of the Ministry of Finance and Economic Development join the First Family and the Nation at large in congratulating the Head of State and Government, First Secretary of zanu-PF, Commander in Chief of the Zimbabwe Defence Forces, His Excellency the President of the Republic of Zimbabwe, Cde Robert Gabriel Mugabe, on the occasion of his 92nd birthday. The Ministry values His Excellency’s faithful stewardship over our great nation and the quest for total independence and economic empowerment of our people. We accordingly wish His Excellency good health, happiness and many more years.

“The Zimbabwe Republic Police is indeed inspired and invigorated by the sound guidance and counsel His Excellency, the Head of State and Government and Commander-in-Chief of the Zimbabwe Defence Forces, President Robert Gabriel Mugabe has continued to proffer in the policing terrain.”

He said the force was inspired by the President’s successful tenure of office as chairperson of the African Union (AU) and Southern African Development Community (SADC).

“The ZRP will continue to tap into your vast knowledge in order to propel the nation to greater heights through sound policing strategies, and nothing will stop us from paying our allegiance to your leadership. We are solidly behind the Government’s stance on the indigenisation and economic empowerment programme as guided by our 2016 theme: “ZRP nurturing a positive attitude, skills and knowledge to meet national demands.”

“We cherish your recent appointment as rapporteur of the African Union bureau for 2016. Ccongratulations Makorokoto Amhlophe.” 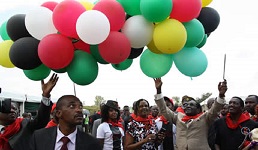 ZIMBABWE - President Mugabe turned 92-years-old yesterday as congratulatory messages started pouring in ahead of celebrations slated for Masvingo province next weekend. In a statement yesterday, the Ministry of Information, Media and Broadcasting Services,...
Share via
x
More Information
x