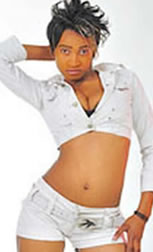 “There are a lot of challenges and jealousy from people at the church. They treat Bev differently from everyone else so she has since decided to stop going to church,” said Mapimhidze.

“We don’t have a problem with her, she is just like any other congregant in the church, but I feel as PHD, a church with more than 90,000 people, we must not concentrate on Beverly alone.

“This issue has been given too much prominence which I think it does not deserve,” said Pambuka.
Bev quit dancing in clubs in January after her spiritual father, Magaya told her to stop dancing in pubs and promised to open a shop for her – a commitment which he has since fulfilled.
Bev repented together with 10 other dancers who are reportedly jealous of the famous dancer with some believed to have gone back to their former trade. – Chronicle

All White Funeral For Ginimbi

Bev wants to return to stripping

Beverly 'Bev' Sibanda's manager Harperz Mapimhidze has confirmed the pole dancer's wish to go back to showbiz. 'There are a lot of challenges and jealousy from people at the church. They treat Bev differently from everyone else so she has since decide...
Share via
x
More Information
x