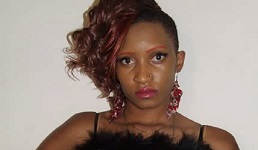 ZIMBABWE – Controvercial raunchy dancer Beverly Sibanda says she has a soft spot for Jah Prayzah and hopes to emulate the crooner’s true musicianship.

The Sexy Angels boss, who is set to provide cover at the red hot entertainer’s first family show of 2016 slated for Zebra Village on Sunday, says she feels humbled being part of the line-up for Jah Prayzah’s ignition party.

I have always wanted to emulate him even though he is a man.

“I have been called all sorts of names over the years but I think I have matured a lot to be my own woman in this male dominated field,” she said.

The 24-year-old also saluted Jah Prayzah for embracing other artistes from other genres.

“Jah Prayzah has done collaborations with so many artistes and I am also looking forward towards forging alliances with him. I am taking the Sunday family show seriously with the hope to be his supporting act in forth-coming gigs.”

Meanwhile, the 28-year-old crooner, who is tipped to amass a number of accolades before year-end, has always maintained that he embraces artistes from other genres.

He also salute his fans in Mbare  and its environs for their loyalty.

“I love my fans from every corner of Zimbabwe and my fellows from Mbare are not spared.

“I am glad to be entertaining them on Sunday and this show is a bit special since we will be starting a new season.

“As usual, I do promise to usher out all my artistic verve at this particular gig which means a lot in my career,” he said.

Rising crooner Potifa Mopo, who has been his supporting acts for the greater part of 2015, will also provide cover at this potentially explosive family show.

ZIMBABWE - Controvercial raunchy dancer Beverly Sibanda says she has a soft spot for Jah Prayzah and hopes to emulate the crooner’s true musicianship. The Sexy Angels boss, who is set to provide cover at the red hot entertainer’s first family show of 2...
Share via
x
More Information