ZIMBABWE – WASHINGTON D.C.—Hardly two weeks after its inaugural congress, the MDC-T breakaway People’s Democratic Party, has developed internal fissures with deputy secretary general, Tongai Matutu, saying there are problems in the party that should be ironed out as a matter of urgency.

In an interview with VOA Studio 7, Matutu, who refuted allegations that he had resigned from the new party as reported in some sections of the local media, said he has differences with colleagues on the way the party conducted elections at its inaugural congress.

Media reports quoted a statement purportedly from Matutu Friday in which he allegedly attacked PDP leadership, labelling them ‘idiots’ and praising his former boss Morgan Tsvangirai.

But Matutu Friday said he had not uttered the statement nor penned a statement to that effect.

“That is not true, I haven’t resigned from the PDP,” said Matutu. “Apparently what happened is that I did not attend the PDP convention in Harare because apparently there were some differences that were emanating between some members and myself and other members of the elections directorate. I wanted them to explain the process they had undertaken to come up with the leadership.”

Matutu is one of the several officials who were disgruntled by the selection process of leaders who were not voted into power but were brought in through what the officials say is selection.

At its inaugural congress last week a group of disgruntled supporters told the leadership that they were not happy that some leaders, especially Julius Magaramombe had been given the position of deputy treasurer instead of being the substantive treasurer.

Matutu told VOA Studio 7 that he is in talks with party leader Tendai Biti to resolve the issue. 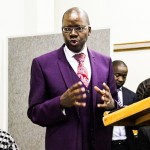 ZIMBABWE - WASHINGTON D.C.—Hardly two weeks after its inaugural congress, the MDC-T breakaway People’s Democratic Party, has developed internal fissures with deputy secretary general, Tongai Matutu, saying there are problems in the party that should be...
Share via
x
More Information
x