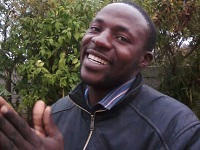 Shumba released his album “NdiJesu” that dominated the charts throughout the year.

The musician’s song “Chimwe neChimwe” was on number one while sungura musician Simon Mutambi’s song “Mukadzi Akanaka” was on number two and “Ebenezer” from Rev Chivaviro became third. For their success, Shumba take home $1 200, while Mutambi gets $800 and Chivaviro gets $500.

Shumba yesterday said he was happy that people love the word of God.

“The development has shown that people love God and that gives us the strength to keep on working hard,” he said.

For him the issue was not about being the best musician but that people listen to the word he sings.

Mutambi was a happy man saying last year was a year of results for him.

“That is the same year when prominent business person and music patron Regis Munenzva opted to assist me in my career. Having our song on the second position of charts that feature so many big artistes is encouraging,” he said.

The Cobra Kings frontman thanked his fans for voting in numbers. Chivaviro whose song Ebenezer has topped different charts is a happy man after taking the third position. “We say Ebenezer because the song has topped the charts and we are happy about the development,” he said.

Organisers said those who correctly predicted the outcome will win different prizes that include television sets, cellphones and hampers.

“See You Again” by Whiz Khalifa (featuring Charlie Puth) led the charts, on number two was local video “Chiramu” from Winky D while Roki and Ex-Q’s “Alleluya” was on third position.

Roberto’s “Amarula” and “African Girl” by Trevor Dongo were on fourth and fifth positions respectively. The positions at both competitions were determined by votes from fans.

Tsvangirai ‘plots’ a ‘Mangoma’ on Chamisa