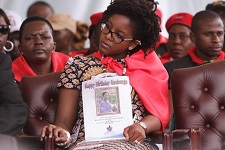 ZIMBABWE – HARARE – President Robert Mugabe’s daughter Bona and her in-laws are caught up in a damaging land dispute after they allegedly elbowed out Zanu PF political commissar for Mashonaland East Province Herbert Shumbamhini from his Divonia Farm in Goromonzi.

Mashonaland East chief provincial lands officer Wilfred Motsi confirmed the development, but said the matter was being dealt with at national level.

“Shumbamhini’s case is being dealt with at our headquarters and they have not yet informed us where we should re-settle him. You can contact our national director for  further information,” he told the Daily News at the weekend.

Well-placed sources told the Daily News at the weekend that the farm — near Juru Growth Point, which is commonly referred to as KwaBhora — was allegedly initially grabbed by Bona from a white commercial farmer only identified as Hunter last year.

But subsequently, the parents of Bona’s husband Simba, Sherman and Christine Chikore — ended up using the farm after it was subdivided, with Shumbamhini settling on the other portion of the disputed land, which he is now being forced away from by the Chikores and the Mugabes.

The sources who spoke to the Daily News also claimed that the post-congress Zanu PF’s seemingly unstoppable factional and succession wars were also at the heart of the farm grab saga and Shumbamhini’s alleged victimisation.

It is apparently being alleged by supporters of Mugabe’s controversial wife Grace that Shumbamhini is using his position as party commissar to undo the divisive restructuring exercise that is being undertaken in the province by Senate President Edna Madzongwe, believed to be a key ally of the First Lady.

“It is all about the factional wars in the party because Shumbamhini is accused alongside (party) provincial chairperson Joel Biggie Matiza of purging party officials loyal to Amai (Grace),” a Zanu PF Mashonaland East provincial executive member said.

Madzongwe is closely linked to a rabidly pro-Grace group of women that is commonly referred to as her Golden Girls.

It is alleged that Shumbamhini dissolved some of the district structures in the province that had been “restructured” by Madzongwe as the battle to succeed Mugabe hots up.

When approached for comment on the farm saga, Shumbamhini referred the Daily News to either Lands minister Douglas Mombeshora, or Matiza, saying they were the ones best qualified to comment on the matter.

On his part, Matiza chose to be diplomatic, saying Shumbamhini was looking for a new farm to settle. He would not be drawn to shed light on the reasons why he was leaving Divonia Farm.

“I am not sure if he has left already, but I know he is looking for a new place. You could ask the chief provincial lands officer Wilfred Motsi for details of the ownership of that farm (Divonia) or Shumbamhini himself,” Matiza.

However, other Zanu PF regional  bigwigs readily confirmed that Shumbamhini had been elbowed out of Divonia Farm, and that he was now being offered a small portion of Eldorado Ranch in Macheke, Marondera — although he is said to be refusing to take up this new offer.

“He (Shumbamhini) was given until this week to vacate the farm and I understand he has been moving some of his property from the farm since Tuesday, under duress, although we are not sure where he taking it,” one of the officials said.

Some of the districts which Shumbamhini stands accused of dissolving include Chamapango and Munhuwepi in Murehwa.

He is also accused by Grace’s supporters in the province of blocking the holding of a primary election to choose a candidate to represent the party in the Ward 16 council by-election in Murehwa, as well as imposing Matiza’s mother Joice.

Matiza, who is closely linked to Vice President Emmerson Mnangagwa, has accused some Zanu PF officials of misinterpreting the party’s ongoing “scientific” verification of the structures “as recommended by Madzongwe”.

Zanu PF critics of the First Family say the complete takeover of Divonia Farm means that the multi-propertied family has now added “yet another farm” to their vast land portfolio, as the president and his wife have displaced several white commercial farmers in Mazowe, including Manzou Farm.

The opposition Movement for Democratic Change is on record saying most of the farms that were acquired under Zanu PF’s disastrous fast track land reforms were parcelled out to ruling party bigwigs and are lying idle.

ZIMBABWE - HARARE – President Robert Mugabe’s daughter Bona and her in-laws are caught up in a damaging land dispute after they allegedly elbowed out Zanu PF political commissar for Mashonaland East Province Herbert Shumbamhini from his Divonia Farm in...
Share via
x
More Information