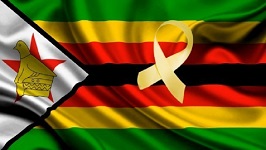 ZIMBABWE – When the barbel was hooked it didn’t come quietly: splashing and thrashing in the river, bending the rod to alarming angles. Once the hook was removed the slimy, whiskered fish did some fancy belly wiggling and flip flopping and then it was free again, slithering around in the grass along the river bank before plop, back it went to freedom. The scary part came a little later.

A splosh was heard, ripples were seen and then eyes were spotted in the water in the darkening night sky. In the torch light an enormous beast could be seen, effortlessly sliding through the water using only its tail for propulsion. In moments the crocodile was there: exactly where the fish had so recently been caught and escaped. It was both thrilling and menacing to see the huge monster, hanging there in the water, only its eyes and the ridges down its back visible above water level. The next morning the croc was on the other side of the river, patrolling up and down, waiting for prey. A pair of hippo made little explosions of bubbles as they too patrolled their territory, every now and again their google eyes appearing on the surface. This river has fallen about six metres below its bank in a wildlife reserve where most of the rivers have sand but not water, where dams and water holes are dry.

As rivers and dams around Zimbabwe drop to alarming levels and natural grazing for animals shrinks , the situation for Zimbabwe’s wild life grows ever more precarious. In the past we’ve had national appeals and mobilization efforts to get food to animals: hay bales, game blocks, game cubes, salt licks. But this time it seems a new idea is in the pipeline. Recently the Minister of Environment, Water and Climate told reporters what was planned. Quoted in the Herald newspaper Mrs Oppah Muchinguri-Kashiri, who had just come back from visiting Chimelong Park in China where Zimbabwe’s elephants were exported to in 2015 said: “The Chinese have inquired about more elephants, baboons, hyenas and lions among others and we will sell them more without hesitation. There is drought and soon the elephants will die. It is better we sell them, especially to those who can take good care of them. Whatever our detractors say, we don’t mind. We are not going to apologise to anyone.”

The article in the Herald said Chimelong Park import hay, water melons, carrots and apples for our Zimbabwean elephants and ended with the sentence: “During the tour , Minister Muchinguri-Kashiri fed the elephants herself with carrots, bread, apples and other fruits.”

African elephants eating bread in China, Mrs Environment Minister; is this the legacy we leave to future generations of Zimbabweans? Is this the same heritage Mr Mugabe spoke about at the World Summit on Sustainable Development in 2003 when he said: * “*We keep our forests, we keep our animals, we keep even our reptiles plus insects. We look after our elephants and ivory. We look after our lions as they roar everywhere. They attract those who would want to see them. We sustain our environment. We are committed to that not just now, but in the future because we want a heritage as a legacy.”

Johnny Rodriguez, a lone voice on the plight of Zimbabwe’s wildlife for the last fifteen years, during land invasions and beyond, summed it up perfectly when he said: “money talks and guilty walks,” in connection with exporting elephants to China and Cecil the Lion.

Zimbabweans, for so long silenced by fear, must step forward and speak out, before more of our national heritage is gone. Do you want your grandchildren to see elephants eating bread in China or browsing on Acacia pods in Zimbabwe? Like so many other things in the last 16 years, the choice is ours.

ZIMBABWE - When the barbel was hooked it didn’t come quietly: splashing and thrashing in the river, bending the rod to alarming angles. Once the hook was removed the slimy, whiskered fish did some fancy belly wiggling and flip flopping and then it was fr...
Share via
x
More Information