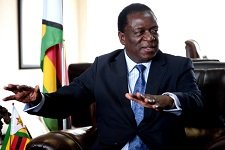 ZIMBABWE – Vice President Emmerson Mnangagwa’s office was not broken into by thieves and the suspected objects found on the ground yesterday were a result of water leakages through the ceiling, police have confirmed.

In an interview, chief police spokesperson Senior Assistant Commissioner Charity Charamba, said this was arrived at following an analysis of the objects by police and other security agents.

“An official report was received from VP Mnangawa’s office to the effect that they had observed some abnormalities when they reported for work in the office of the Vice President.

“Following that report, a Ferret Team comprising of ZRP and other security sister organisations visited the crime scene and made an analysis. They observed that there were no visible disturbances in the office,” she said.

Snr Asst Comm Charamba said the team observed a hole on the ceiling panel on the western side of the office.

“The team observed some fallen panel chips on the carpet directly below that hole. So they conducted investigations as a team. They also summoned the Police Forensic Science experts.

“They examined the carpet area and so far initial investigations indicate that there was no evidence of drilling and the hole appeared to have been perforated by dripping water. The fibre glass within the hole was unbroken and intact suggesting that no object was used to perforate the hole,” she said.

“Also observed was an initial development of a similar hole manifesting on the same panel due to water dripping and seepage.

There was a roof bolt directly above the hole. The ceiling panel in question is adjacent to the previous panel from the January 13 incident.”

Snr Asst Comm Charamba said the findings indicate that there were no signs of forced entry into the VP’s office through the door, window and ceiling.

She said the ceiling and the panel that had a hole was beyond reach from within the ceiling. Snr Asst Comm Charamba said police and other security organisations were still investigating the other cases in which VP Mnangagwa’s office was broken into by unknown culprits.

In January, there was yet another break-in at VP Mnangagwa’s office and Government expressed concern at continuous attempts on his life as it pledged to bring the culprits to book.

This was the sixth time unidentified culprits have tampered with VP Mnangagwa’s offices in Government and at party level.

VP Mnangagwa’s offices have been broken into four times at the Ministry of Justice, Legal and Parliamentary Affairs and once at Defence House when he was Defence Minister.

His offices at Zanu-PF Headquarters in Harare were broken into by unknown elements in 2014 who laced his desk with cyanide, poisoning his secretary who had to be hospitalised.

In the latest break-in at the Government Complex, the culprits drilled a ceiling panel to gain entry. There were no indications of anything stolen.

VP Mnangagwa could not be reached for a comment as he is out of the country on official business.

ZIMBABWE - Vice President Emmerson Mnangagwa’s office was not broken into by thieves and the suspected objects found on the ground yesterday were a result of water leakages through the ceiling, police have confirmed. In an interview, chief police spokesp...
Share via
x
More Information
x