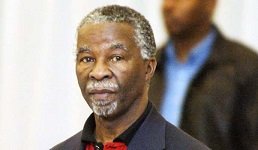 ZIMBABWE – Britain has remained tight-lipped over an alleged plot to “remove” President Robert Mugabe’s government by military force a decade ago.

The plot, according to former Sadc mediator to the Zimbabwean crisis ex-South African President Thabo Mbeki, failed to find traction after his administration refused to endorse it despite pressure from then British Prime Minister Tony Blair to support an invasion of Zimbabwe.

“The United Kingdom government’s view has always been that it is for the people of Zimbabwe to decide their future,” the embassy said in an emailed response.

British envoy to Harare, Catriona Laing, said her country would support “the aspirations of the Zimbabwean people”.

“We have always wanted to see a legitimate government in Zimbabwe which promotes good governance, respects human rights, delivers for its people, and contributes to wider regional stability.

“We will continue to do all we can to support the aspirations of the Zimbabwean people for a prosperous and democratic Zimbabwe,” Laing said.

In one of his articles published online, Mbeki said a top British military official had indicated Blair was ready to send troops to Zimbabwe.

“We knew that, because we had come under the same pressure, and that we need to co-operate in some scheme – it was a regime change scheme – even to the point of using military force, and we said ‘no’,” the former South African leader said.

Mugabe has consistently accused former colonial master Britain “and her allies” of habouring a regime change agenda by financially supporting opposition formations in Zimbabwe to undermine his administration and possibly to topple him.

His critics have accused the 92-year-old of “seeing shadows” and at the weekend during celebrations to mark his birthday, the Zanu PF leader claimed the Western countries were taking advantage of succession fights in his party to infiltrate the government.

In another article yesterday, Mbeki said since the day of President Ronald Reagan, the US had adopted a policy of “using the issue of human rights to impose its ideology on other nations”.

ZIMBABWE - Britain has remained tight-lipped over an alleged plot to “remove” President Robert Mugabe’s government by military force a decade ago. The plot, according to former Sadc mediator to the Zimbabwean crisis ex-South African President Thabo M...
Share via
x
More Information
x