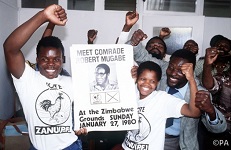 ZIMBABWE – flashback . . . The build-up to the Rhodesian General Election. Supporters of Robert Mugabe and the Zanu wing of the Patriotic Front display a campaign poster in Salisbury, the capital (now Harare) in 1980.

IN 2013, Robert Mugabe was re-elected president of Zimbabwe in a landslide victory over his long-time political rival Morgan Tsvangirai. The result — criticised by the opposition — baffled many observers. Few players were more taken aback by Mugabe’s reassertion of political dominance than the UK

Writing in Prospect magazine, soon after Mugabe’s re-election, the director of the Royal Africa Society, Richard Dowden, commented that the Zimbabwean president’s triumph was:

“The biggest defeat for the United Kingdom’s policy in Africa in 60 years.” Both the British ambassador and the MI6 head officer in Harare called it wrong.

Dowden was correct that the British ambassador at the time, Deborah Bronnert, was mistaken about the likely election outcome. I met Bronnert in Harare during her diplomatic tour there and encountered her a final time at Chatham House (London), where she delivered a presentation on the political situation in Zimbabwe a few months before the 2013 election. Bronnert never left me with the distinct impression that she had a good understanding of Mugabe the political operator and of politics in the ruling Zanu-PF party. And I saw her unqualified delusion at Chatham House, months before the fateful ballot. Bronnert could not see Mugabe’s coming poll shocker. According to confidential sources that can be expected to know, Bronnert swayed UK Prime Minister David Cameron, in their bilateral discussions, to believe that Tsvangirai would win the election, even as opinion was split within the FCO as to the credibility of Bronnert’s standpoint.

Where I part ways with Dowden is on his conviction that Mugabe’s 2013 victory was the UK’s “biggest defeat” in Africa in six decades. There was a much more significant foreign policy defeat for the FCO in Zimbabwe: Mugabe’s first success in the 1980 independence election. Mugabe has been immovable since independence — seeing off a range of domestic and international political opponents across three decades. He has now been president of Zimbabwe for 36 years.

Lord Charles Powell — then a Foreign Office diplomat — reminisced that: We never realised Nkomo was not going to win until the results came in. There was even a sweepstakes in the Foreign Office on the election result and it was won by a man in (foreign secretary) Peter Carrington’s office called Sir Paul Lever. And it is interesting that he was the one person in Carrington’s office who had had absolutely nothing to do with Lancaster House and Rhodesia, but he won!

From the beginning, Mugabe was not — and never will be — a favourite of the FCO. He was seen as a Marxist-Leninist who was unmanageable, from the point of view of UK interests in Zimbabwe. A combination of genuine disdain for Mugabe and poor intelligence gathering on the likely election outcome, resulted in the FCO downplaying his chances.

As my research uncovered, the UK government only managed the 1979-1980 Zimbabwe/Rhodesia ceasefire effectively because the independence, political nous and competence of military officers such as Acland ultimately prevailed over the injudicious views and machinations of FCO diplomats. Added to these factors the fact that — in key moments — fortune smiled on the FCO’s pursuit of making sure Zimbabwe/Rhodesia won independence.

Take for instance the Mozambique president Samora Machel’s eleventh-hour intervention during the FCO-led Lancaster House independence negotiations in December 1979, in which he plainly told Mugabe to agree a settlement because he was no longer prepared to support the guerrilla war that Zanu-PF was waging from Mozambican soil. Without Machel’s intervention at Lancaster House, the FCO would not have achieved an independence settlement for Zimbabwe/Rhodesia in 1979.

Zimbabwe is no longer high up on the FCO’s priority list — there are more important foreign policy agendas to grapple with, such as the future of the European Union and terrorism in the Middle East and other parts of Africa.

Still, how far reaching the re-engagement with Mugabe — who will next face election in 2018 — should be and what a post-Mugabe Zimbabwe will look like continue to exercise the minds of British diplomats and to divide opinion among the diminished numbers in the FCO who remain keenly engaged on Zimbabwe.

ZIMBABWE - flashback . . . The build-up to the Rhodesian General Election. Supporters of Robert Mugabe and the Zanu wing of the Patriotic Front display a campaign poster in Salisbury, the capital (now Harare) in 1980. IN 2013, Robert Mugabe was re-elected ...
Share via
x
More Information
x