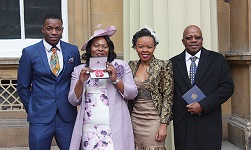 ZIMBABWE -Zimbabwean born Jennifer Ngulube was last Friday honoured on the Queen’s Birthday Honours roll and received an MBE from The Prince of Wales, Prince Charles at Buckingham Palace, NewsDay has established.

Jennifer’s award was in recognition to her service to children –particularly her passion for helping and looking after children who are removed from their families by the United Kingdom Social Services, following mostly abuse, neglect and sometimes as a result of domestic violence in the families.Investitures are held for deserving members of the public in recognition of their contribution to society. Jennifer is now officially Dame Jennifer Ngulube MBE, after receiving the prestigious insignia from the British Royal family.Her eldest brother, Junior Ngulube, who is chief executive officer of the Munich Reinsurance Company of African Limited, told NewsDay that many of these children arrive at Jennifer’s house traumatised and socially dysfunctional, to such an extent that many foster homes are reluctant to take them in.

Junior travelled from Johannesburg, where he is based, to walk his sister’s path of honour with her, as well as represent the wider family back home in Zimbabwe.

“Jennifer has taken in over 20 such children over the years in the comfort of her own home and nurtured and restored the damage caused by the suffering in their earlier years. These children stay with her for varying periods of times, from a few weeks to years for others as the rehabilitation process is a long and slow one,” Junior said.

An ecstatic Jennifer said: “. . . giving is receiving” adding she felt her own family life has been enriched by the opportunity she and her family have had of living with children from different cultural backgrounds, notwithstanding their difficult circumstances.

Jennifer also said meeting and chatting to Prince Charles, who presented her with the award, was indeed “a momentous memory for her”. She encouraged and challenged everybody during the festive season to go the extra mile in sharing the spirit of Christmas by giving to the less-privileged in society, “regardless of where we are in the world”.

According to the UK Cabinet office website, the Honours Lists on The Queen’s Birthday recognise the achievements of a wide range of extraordinary people right across Britain.The honours system recognises people who have made achievements in public life and committed themselves to serving and helping Britain. They would usually have made life better for other people or be outstanding at what they do.

Civilian gallantry awards recognise bravery by people who have attempted to or saved the life of a British citizen who is not a family member or close friend, and the nominations are judged on degree of risk, how aware the nominee was of the danger and persistence.

However, whether someone gets an honour — and the honour they get — is decided by an honours committee whose decisions are presented to the UK Prime Minister and then to the Queen, who awards the honour.

Jennifer has been living in the UK for more than 10 years. She trained as a special needs teacher in the country, a job she did before leaving for the UK. She now has British Citizenship.