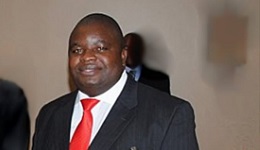 ZIMBABWE – On Thursday next week, the Minister of Finance, Patrick Chinamasa, will present the Budget Statement and Estimates of Revenues and Expenditures. There are so many vexing problems which ought to be addressed. The first problem has to do with the curtailing of Zimbabwean imports from South Africa in view of the progressive depreciation of the South African rand against the United States dollar.

South Africa is Zimbabwe’s largest trading partner. Zimbabwe imports machinery, food, electricity, fuel and many other goods from or via South Africa. The balance of trade has been historically tilted in favour of South Africa. Paradoxically, despite the overvaluation or undervaluation of the then Zimbabwean dollar in the past, the trade pattern has never been altered.

South African products have always landed in Zimbabwe cheaply due to the fact that our manufacturing sector has been uncompetitive — the long legacy of import substitution and protectionist policies of pre and post independence industry and trade regimes. In theory, the devaluation of the exchange rate, other things remaining equal, will result in the increase in a country’s tradable goods on the regional and international market and thereby reduce the trade deficit and vice-versa. However, there is no empirical evidence to affirm this position in regard to Zimbabwe’s exports to South Africa, despite the frequent depreciation of the Zimbabwe dollar against the South African rand over time until we dollarised.

When dollarisation was introduced in January 2009, everybody thought that imports from South Africa would be reduced on account of the strength of the US dollar vis-à-vis the rand. Instead, imports steadily jumped to alarming levels.
By 2014, the import bill stood at US$7 billion of which 65% were imports from South Africa, compared to exports which stood at US$4 billion. With the current depreciation of the rand against the United States dollar, it is feared that imports will accelerate and cause a balance of payments migrane for Zimbabwe.

About three million Zimbabweans are estimated to be living or working in South Africa. Imagine the remittances that have been sustaining livelihoods of millions of people back home and the implication of the rejection of rand by the market? This is a disaster waiting to happen and the minister should think outside the box and address this problem decisively in the budget statement.

The second major macro-economic issue, which the 2016 budget is expected to address, is the question of debt service. Zimbabwe made a breakthrough at the recent IMF/World Bank annual meetings in Lima, Peru, when it engaged its creditors (multilateral and bilateral) in order to agree on Zimbabwe’s proposal to retire its arrears.

Zimbabwe’s arrears stand as follows: World Bank (US$1,15 billion); IMF (US$110 million) and African Development Bank (US$601 million). Creditors agreed on Zimbabwe’s plan to retire the arrears by April 2016 (5 months timeframe). How realistic is this time frame? How is the money going to be raised? What will be the implication on domestic obligations and public service delivery? These questions need to be addressed clearly in the November budget statement. One thing which Chinamasa needs to bear in mind is the fact that the repayment of the arrears will not automatically unlock new money. Far from it. Technical engagement (which again is conditional upon the successful implementation of the IMF Staff-Monitored Programme) must be followed by political engagement by the powers that be.

The third problem is how to grow the cake and reverse the declining growth rates. In the 2015 budget, the growth rate was estimated at 6%. This was revised during the July mid-term policy review to 3,5% and further revised downwards to 2,5% in the October Budget Strategy Paper. It is now almost a truism that growth is constrained by lack of FDI, supply side bottlenecks and deflation.

This triad of challenges must be addressed in the budget statement. In other words, Zimbabweans are waiting to hear what economic stimulus package the government is going to unveil. Zimbabweans are sick and tired of a distributional budget which does not grow the cake.

Predictably, the minister is going to announce a huge agriculture budget which won’t be funded because there is no money to allocate. The purported funding of agriculture has in the past years become lip service and mere rhetoric for the sake of political expediency. It has been mere posturing.

The fifth issue that needs policy clarity is the question of civil servants bonuses and labour market flexibility.

Previously, Chinamasa had unilaterally declared that bonuses were a privilege and not a right. The truth of the matter is that the minister was playing to the IMF gallery.

According to the IMF, employment costs should be reduced from the current levels of 80% to 40% of recurrent expenditure. It is clear that the minister was acting as the mouth piece of the Bretton Woods institution.

Chinamasa’s position was overturned by President Robert Mugabe on account that what the minister had announced was not a cabinet position (again a typical example of policy inconsistency). It therefore remains to be seen what the correct position is.

Finally, in my view, the minister should pronounce policy measures to deal with parastatals which are a drain on the fiscus. As long as there is corruption, bureaucracy, mismanagement and inefficiency in parastatals, fiscal policy will not succeed. In fact, parastatals have become the elephant(s) in the living room. Therefore, to all intents and purposes, the budget statement must be a no-holds-barred fiscal policy statement. The budget must unveil practical measures to address some of the challenges mentioned above and many more that I have left out.

It must not be business as usual. Zimbabweans are expecting a game changer in the budget. But regrettably, Zimbabwe’s socio-economic challenges transcend the budget. The budget is a mere tool of fiscal policy which is crafted within the confines of a macro-economic framework, which in turn is determined by the political economy of the country. The budget is a short-term instrument of economic and financial programming and not a development strategy. This statement should not be too difficult to understand if one considers the fact that almost 90% of the cash budget goes towards recurrent expenditure. The cash budget will not address structural issues like poverty, unemployment and infrastructural development. The problem with a cash budget is that it is premised on the notion of futures.

Whatever amounts allocated to departments are like a pie in the sky because it all depends on future cash flows accruing to the Consolidated Revenue Fund. Cash budgeting is an act of distributing what is not yet there. Hence the cash budget is based on assumptions, which are often unrealistic.

In surplus economies, they do real budgeting whereby actual amounts are populated into departmental accounts based on drawbacks from the accumulated surpluses. This would have been the case for Zimbabwe if the Sovereign Wealth Fund (SWF) was performing. When the SWF Bill was presented in parliament in 2014, I warned the Chinamasa that the fund would not take off because the country was living from hand to mouth with nothing to save. Apart from the pomp and ceremony of it, the budget under our present circumstances is just but a damp squib.

Mashakada is an economist and MP for Hatfield and former minister of economic planning and investment promotion.

Budget must translate talk into walk

ZIMBABWE - On Thursday next week, the Minister of Finance, Patrick Chinamasa, will present the Budget Statement and Estimates of Revenues and Expenditures. There are so many vexing problems which ought to be addressed. The first problem has to do with the ...
Share via
x
More Information
x