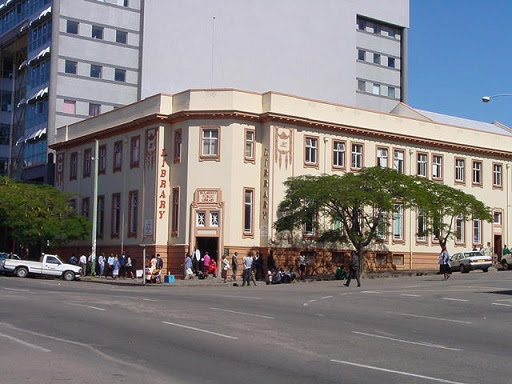 BULAWAYO -THE Bulawayo Public Library quietly celebrated 125 years of service to Bulawayo residents last Tuesday. When it started operating in 1896, it mainly served colonialists who had occupied the country.

Over the years, the library has transformed to serve the majority and at any given time, school children and adult researchers are found at the information centre.

During the formative years, it operated from rented premises. It is the first library to be constructed in the country and it only took four months for the structure located at the corner of 8th Avenue and Fort Street to be completed at a cost of £3,960

Deputy Administrator of the colony, Arthur Lawley after moving from a rented building.

Bulawayo Public Library board member Mr Paul Hubbard said as one of the largest buildings in town, initially the library building accommodated institutions such as the National Museum, the Chamber of Commerce, the

Association.In 1978, the library introduced its first ever mobile service by converting a single-deck bus into a library and could transport 2000 books.Its mobile services have continued to serve the Bulawayo community particularly schools where learners cannot easily access the city centre.

Its source of revenue is solely subscriptions from members.The library has at least 2000 members who pay quarterly subscriptions of $1200.Bulawayo public library deputy librarian Mr Roland Ndhlukula said innovation and being relevant to the needs of readers is what has kept the library ticking.

“It means we have come a long way as a library and we have been on our own. We are not under council nor are we under Government. We have been on this road on our own, most of it. This is a subscription-based library, we solely rely on people coming in to join the library and when they pick up books there is a certain fee that they pay that is what has been sustaining us for all these years,” said Mr Ndhlukula.

“We also want to thank the people of Bulawayo for being faithful and true to the brand as we all know that this country has gone through different phases of difficulties but the people have been supporting us throughout the journey.” He said the services that they offer is what has captivated them to continue in service.

Level section where pupils can come in and access books for their studies. We know that in schools there are limited textbooks, so they come to get their textbooks from the library.”

Mr Ndhlukula said embracing digital technologies is one of the strategies they have employed to remain relevant especially at an age where there is digital migration.

The library also offers braille services for the visually impaired in its attempt to promote inclusive education.

“We do story telling at the children’s section, puzzles just to make sure they are captivated. It’s not always about the book, because the book alone can be less attractive.

We have a study room where we bring in current books. We have done away with the old books and we have new books that need to be put on the shelf. We have poetry sessions and Hip-Hop sessions just to make the library dynamic and not only about books,” said Mr Ndhlukula.He said Covid-19 has been one of the biggest challenges threatening the library’s existence.

“Our numbers have dwindled because of Covid-19. People have been trying to stay away as much from the library.

When we closed down there was no income that was coming in and that caused a lot of problems. There is also the rising costs of books locally,” he said.

“If you take a look around, the furniture is old and we greatly need to replace it. This is an 80-year-old building and has not been painted in the last 20 to 25 years so we need new paint for the inside and outside.

Bulawayo Provincial Education director Mrs Olicah Kaira hailed the Bulawayo Public Library for the complementary services to the country’s education sector. She said the library is also promoting a reading culture among residents and has the capability to capture them at a young age.

“The Bulawayo Public Library offers a reading space to learners to enhance their academic performance. With the advent of Covid-19, learners accessing the public library improve information literacy thereby complementing what has been learnt in the classroom.

Their research skills are improved as well, especially for those that seek additional information for their Continuous Assessment Learning Area (CALA) activities. It provides a conducive reading environment which promotes reading culture,” said Mrs

BULAWAYO -THE Bulawayo Public Library quietly celebrated 125 years of service to Bulawayo residents last Tuesday. When it started operating in 1896, it mainly served colonialists who had occupied the country. Over the years, the library has transformed to ...
Share via
x
More Information