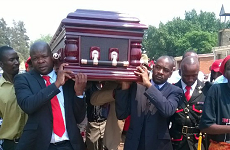 The Thamsanqa Mahlangu burial fiasco on Saturday has not only exposed deep-seated divisions in the Morgan Tsvangirai led MDC-T but also serves as an indicator that the embattled leader has lost grip of the equally troubled opposition party.

Tsvangirai reportedly flew to Bulawayo on Thursday for the burial of the late Nkulumane legislator but he and members of his national executive snubbed the burial with party spokesperson Obert Gutu saying “We didn’t want to be caught up in family politics.”

However, evidence on the ground contradicts Gutu’s claims as party youths openly clashed along factional lines with those linked to former organising secretary Nelson Chamisa on one side and those aligned to deputy party president Thokozani Khupe on the other.

Already, indirectly, Tsvangirai has accused some of his lieutenants of trying to push him out of his position by calling for an early congress before the 2018 elections when he is likely to be dethroned.

The target of his words, party insiders confirmed, was Chamisa and the lawyer almost confirming the fall out appeared in the media distancing himself from plots to depose Tsvangirai.

The MDC-T leader has also been accused of bias towards the Khupe grouping, something insiders say, was confirmed by his non attendance at Mahlangu’s burial on the advice of that particular grouping.

The Khupe grouping had reportedly camped in Luveve at the Sangos, Mahlangu’s biological father while the Chamisa grouping now referred as the “Cobra” gang was at the Mugova’s, the late legislator’s step father’s house in Nkulumane where Mahlangu lived after completing his Advanced level and from where he rose in politics.

The factions tussled for control over the process to a point of exchanging blows and already there is word that some officials are being targeted for censure.

Most significantly however, Mahlangu in his death exposed Tsvangirai not only as a spineless leader easily swayed to the whims of factional politics within the party but also that the MDC-T’s so called big tent is nothing but a dilapidated shack that can’t accommodate members of the party let alone those they have been calling for alliances.

How Tsvangirai thinks he can lead a country like Zimbabwe when it’s clear that he can’t preside over an opposition party that continues to fragment by each day is something specialists on delusion can explain.

The MDC-T leader, we are told, chose to align himself to the Khupe grouping who chose not to attend the burial because they had been blocked from taking over the process by a rival faction.

Instead, Tsvangirai, we hear, spent the entire day holed up at a house belonging to a party official reportedly linked to the Khupe faction, not because the families were fighting but because he had been briefed of the chaos caused by the party’s youths and perhaps wasn’t prepared to be embarrassed knowing that even he won’t call them to order.

Granted that the families had misunderstandings over the process of burying something that was widely reported but the party cannot hide behind the families’ stand-off to make everyone believe that they did not contribute to the chaos.

Recorded events are in the open for all to see that the factionalism in the MDC-T actually led to physical clashes on the day of Mahlangu’s burial.

It was the MDC-T youths clad in full party regalia and not members of the families who blocked Mahlangu’s body from being taken out of a hearse in Luveve resulting in the driver speeding off.

If there is one thing the party can’t wipe off the memory of the people is the drama that occurred in Nkulumane as the rival factions clashed.

On Friday, rival factions openly clashed in front of mourners as some wanted a tent from Nyaradzo Funeral Services to be taken from Nkulumane to Luveve.

There was to be more drama when an alleged Khupe grouping visited the Nkulumane house at 4am, Saturday morning, to collect Mahlangu’s body but was resisted.

But before that, the party’s national organising secretary Abednicho Bhebhe was chased from Nkulumane by youths allegedly aligned to Chamisa and was overheard on the phone saying, “Ama Cobra seyale lesidumbu.”

Chamisa has been openly denounced by party members aligned to the Khupe grouping over allegations of plotting against Tsvangirai.

In the morning of the burial, the party youths carried Mahlangu’s casket from the Mugova house to the Roman Catholic Church amid fears that the Khupe grouping would divert the hearse to Luveve.

The party youths only clashed in Luveve as the Chamisa grouping resisted attempts to lower Mahlangu’s casket.

The youths that exchanged blows were neither the Mahlangus, Mugova or Sangos but MDC-T youths who found the burial or the broader funeral process as a platform to settle political scores.

The images of Chamisa leading pall bearers after the church service, is also damaging to Tsvangirai.

Not that Tsvangirai had to literally carry the coffin but after snubbing the burial completely, he, in the eyes of the people, comes out as an undecided and uncaring leader.

Chamisa on the other hand is seen as a compassionate politician, humble and having gotten in touch with the masses in burying Mahlangu widely revered among the youth of the party.

What is clear is that Tsvangirai is the chess king about to fall in a smothered checkmate fashion.

In the game of chess, the smothered checkmate occurs when all the squares around a king are occupied by his own pieces and the king can’t escape when attacked.

Tsvangirai’s lack of judgement, indecision among a cocktail of weaknesses are fast catching up with him, to the extent that a significant number within his party are convinced that the former trade union leader doesn’t have the qualities to lead the party, let alone offer any challenge to the ruling Zanu PF.